A funny and informative show about life with a baby bump, performed by a pregnant feminist.

Hannah Ballou is a funny and opinionated woman who, seeing as she performed a show at about 8 months pregnant, could be described as slightly nuts. But nuts in a good way, I promise. From reenacting her own Vanity Fair pregnancy shoot, to getting the audience to make the final decision on her baby's name, this show explored angles of pregnancy you could never expect.

Hannah's comfort and confidence in her body made for several interesting costume changes and some wonderful dancing involving an exercise ball. Although I found her material amusing, I think the show was probably better suited to people who either are pregnant or have been before, as I was completely unable to relate to her situation. The rest of the audience, mainly in their 20s and 30s, were howling with laughter.

The highlight of the show for me was when Hannah's pet pug was brought onstage. He was clearly not happy about the addition to the family and everyone fell in love with him instantly. I love that Hannah's show aimed to make us, as the audience, a part of her experience. She showed us a video from a previous show where the audience had revealed the gender of her baby to her, and in our show we were given a choice of four names, voted, and then revealed the name we had collectively chosen for her baby.

Overall it was a clever and funny show and I really enjoyed it, but I think it is better suited to someone slightly further along in life than I am at this moment.

This was a one-off show at Brighton Fringe 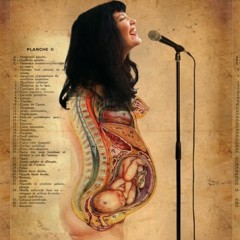 A funny and informative show about life with a baby bump, performed by a pregnant feminist.