Tree; an authorship row. Let me break it down for you (with some help from GIPHY).

I’m sure if you have any internet connection and an interest in theatre you’ve heard or seen things about Tree at the Young Vic and the current controversies surrounding the writers. No idea what I’m talking about? Saw something about it but missed the initial statement and quite honestly have no idea what’s going on? I’ll break it down for you.

So, Tree has just opened at the Young Vic in London last week after a short run at the Manchester International Festival. Kwame Kwei-Armah and Idris Elba are credited for creating the production. So what’s the issue?
They didn’t write the show.

Tori Allen-Martin and Sarah Henley did.

Why aren’t they getting credit for writing this production? Well, that’s the big question.

Tori and Sarah wrote a piece on a blog site called Medium on 2 July 2019, explaining, in detail, exactly what happened from the conception of this piece back in 2013, to them having no part of the show’s life today. Here’s a summary of their story...

Back in 2013, Tori and Sarah were doing a show called Streets, which Idris Elba, being a friend of Tori’s, went to see. He loved the show and was quick to ask if he could do anything to help. He flew Tori out to Africa later that year, where she lived for a month working on Elba’s album mi Mandela, singing on multiple tracks.

Jump forward to January 2015, Elba offered Tori the chance to come up with a musical, similar in style to their show Streets, but featuring music from mi Mandela. Tori produced an outline of the idea that would come to be known as Tree and Elba agreed for her to bring Sarah in to work on it with her.

Next, they met with Duchess Street Productions (now the Anthology Group, who are listed as producers of Tree) and Green Door Pictures (Elba’s company) to discuss officially commissioning the project.

The commission went ahead, and Tori and Sarah decided to name the project Tree after one of the tracks on the album. They spent months researching the show and delivered the first draft in October 2015.

In March 2016 Tori and Sarah signed a commissioning agreement, giving them the right to veto any other writer brought in, and to approve any changes in the script. It also entitled them to a royalty should the show go ahead.

Throughout the rest of 2016, there were workshops at Hackney Empire and the Dominion Theatre which gave them a chance to see what the show could become. All the producers currently involved with the 2019 production of Tree were invited and/or present at these events.

The workshop required extra work including an abridged script, narration as well as additional songs, all of which Tori and Sarah provided. The response was excellent, with the BBC placing Tori and Sarah on the BBC New Talent Hotlist 2017. They also learned that Manchester International Festival were interested in the show, as were the Young Vic.

Source: GiphyMay 2018, after not having heard anything for a while, Elba phones Tori to confirm Kwame Kwei-Armah was keen for the Young Vic and Manchester International Festival to partner on the show. He apologised for the lack of communication, stating he only wanted to get in touch when he was sure it was going ahead.
On 29 May 2018, Tori and Sarah meet Kwei-Armah at the Young Vic. He was very excited about the project and stated explicitly that he didn’t want to write it, only dramaturg and direct it. Following this meeting, they also received an email from Manchester confirming the shows run there.

So what went wrong?

Well, between June and October there were many emails and phone calls between Tori, Sarah and Manchester International Festival claiming that delays were down to difficulty scheduling with Elba and Kwei-Armah’s diaries. What they learned later on was that the project was being developed without them.

Tori and Sarah found out that a promo shoot was filmed for the show on 18 October 2018, after seeing a post on Kwei-Armah’s Instagram about it. The same day, there was a phone call out of the blue from Elba to Tori saying he was sending over a revised synopsis by Kwei-Armah.

Although changes had been made to the storyline which Tori and Sarah thought to be detrimental to the attempted message of the piece, the premise as a whole, the timeline, most of the characters and their relationships and many of the plot-points remained the same as in Tori and Sarah’s version.

Tori and Sarah responded to Elba with their issues around the revised synopsis and requested to speak to Kwei-Armah in person to discuss work out their creative differences and find the best way to move forwards. Elba got back in contact with Tori a week later as Kwei-Armah had declined to speak directly.

Elba remained the only person on the project to communicate personally with Tori and Sarah.

At the end of October 2018, the show was announced publicly, without Tori and Sarah’s names in any of the material. On the same day, Tori and Sarah received an offer from Kwei-Armah via Manchester International Festival to write a new version of the show based on his revised synopsis – a ghost writing offer.

The offer required a new draft of a musical within one month and no credit or creative control. Their agent wrote back with a counter-offer, asking for credit for their work. The response put the discussion of credit aside and told them that Kwei-Armah had offered to clear his diary to meet with them the next day for a creative meeting. Tori and Sarah weren’t able to make the meeting on such short notice and weren’t comfortable with having any more creative discussions until they had cleared up the issue of them not being credited.

On 14 November 2018, they were officially dismissed from the project.

Their reluctance to attend this creative meeting at the end of October was cited as one of the reasons. Upon meeting with Green Door, their agents were told it was a different production so they had no claim to it, but that they would consider a ‘with thanks to’ credit as a gesture.

From then onwards, Tori and Sarah have sought legal advice and spent a lot of money on lawyers. They have been advised that it would cost them a minimum of £20,000 to defend themselves in court and despite their lawyer believing they are in the right and that the contract has been breached, they just don’t have deep enough pockets for the case.

Tori and Sarah have received several offers to buy them out, but none of the offers cover their costs and four years of lost work. Tori sent a letter to Elba offering to drop their claim if he would help them set up a scheme for female writers to create a positive change in the industry. They refused to commit unless Tori and Sarah signed something denying their claim to Tree.

After this blog was posted by Tori and Sarah, Kwame Kwei-Armah responded on twitter. This is the final part of his statement:

It’s fair to say, people were not impressed with this response. The Young Vic have now also issued a formal statement on their website detailing the situation from their point of view. They also summarise that the project is completely different now and has no connection to Tori and Sarah’s original play. It seems after hearing Tori and Sarah’s account, the theatre are ignoring the fact the show was their idea in the first place…

So has any good come from this?

I’m glad you asked. YES. Tori and Sarah have set up an organisation called Burn Bright which aims to support female writers through their careers. So far they have raised over £15K and counting, which will also help them cover the money they lost over Tree.

Their voices are being heard. Hopefully, this will affect a change in the industry and will help writers in the future who suffer with similar issues. 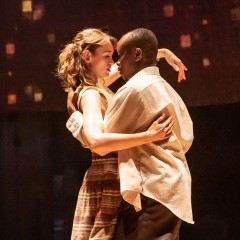 Tree; an authorship row. Let me break it down for you (with some help from GIPHY).