On the 23rd of December I went to see Dear Evan Hansen. It was such an amazing performance and I really enjoyed watching it. the cast was very small but, together they were really powerful and put 100% into their acting. I thought that the sets were very effective because, even thought they were small and simple, the transitions to get them on and off of the stage and how they were used during the show was really interesting to watch and you didn't get bored.

There wasn't much dancing in this musical however, I felt that for this show it wasn't needed. This is because it is about such an emotional topic and worked better with just acting, singing and a bit of movement.

I couldn't say anything that I disliked about this musical except from the fact that it is quite a deep topic which could be upsetting to some people.

Overall I think that this is an amazing show that was really enjoyable and funny but, it also had some really sad parts which made it more interesting and i definitely recommend that you go and watch it! 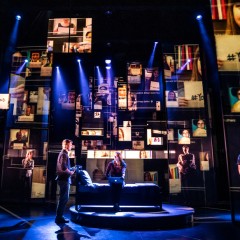