A light-hearted comic with a charming sense of humour, David indulged us with stories about his wife and his hair-dresser.

There were some really nice gags, complimented with music and singing, including a funny demonstration of a "monkey marriage" with two members from the audience.

His best feature by far is his comical timing with the music in his act. He started his act with a brilliant lip-sync to the intro of Whitney Houston's 'I Wanna Dance With Somebody', which he followed with a story about him getting a haircut (LOL worthy).

His blend of music and comedy really brings the fun into funny.

His cynical tone makes him an enjoyable character to be around and proves that you don't need to be loud to be funny. This kind of humour also adds to the hilarious musical comedy act he presents us with.

If you've had a long day and you need someone to cheer you up with some singing and jokes about monkey marriage, then go and see David Elms, he doesn't disappoint and if he does he'll tell you.

I managed to speak to the comedian himself after the show to ask him about his performance and his career as a comedian. Hear the insight in my brief interview with David Elms soon. 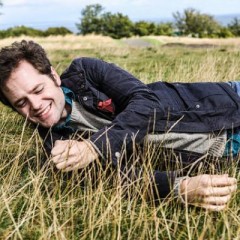 A light-hearted comic with a charming sense of humour, David indulged us with stories about his wife and his hair-dresser.