A poetry journey through dark and light with compelling messages and enlightening stories.

Down an unassuming alleyway; we entered the Fives Leaves Book store, a brilliant independent shop for the local or radical reader alike. It seemed a fitting setting for the queer poet – Shaun Hill.

Currently based in Birmingham, his infectious personality was strongly felt by the audience when reciting ballads about the influence of Edward Muggeridge (pioneer of photographic motion imagery) and the powerful ‘Boys Like You’ which plays on the idea of what it is to be masculine. Nodding heads and low murmurs continued throughout his solo show which was mostly dark in tone. It lightened significantly during the second half when referencing his partner through A 'Window of Moseley’ which highlighted the instant connection that happens between two humans and the presence it can have on a seemingly solitary life at times.

As with any show, things happen behind the scenes and it was announced at the start that a second artist was suppose to perform – Danielle Alakija. Shaun was kind enough to fill the space where she would’ve started. I believe all things happen for a reason; Shaun came through fully prepared to awaken us all to his raw and emotive short and sweet poetry. I for one am sure glad he did. 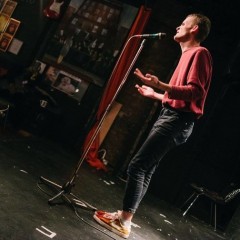 A poetry journey through dark and light with compelling messages and enlightening stories.