ASC’s third batch of eleven songs is out and we review them all.

From crowd surfing to TikTok sleepovers – it can only mean American Song Contest Week 3 has dropped.

In comparison to Week 1 and Week 2, this week’s heat might be the most competitive yet.

In this week’s heat, only four contestants will go through – one selected by a professional jury during the live programme. For this week, that would be Tyler Braden from Tennesse with his country ballad ‘Seventeen’. Again, the jury must love a ballad, following on from Kentucky’s Jordan Smith’s ‘Sparrow’ and Rhode Island’s jury selection with ‘Held On Too Long’ also both making the jury cut. For the remaining 3 spots in the next round, the American public will decide their favourites later on in the week.

Before we proceed, let’s have a bit of a recap on what went down in Week 2. Last week saw four acts go through. Jordan Smith from Kentucky was the Jury Selection for his song ‘Sparrow’. As for the other three qualifiers, the jury votes were mixed with public votes (from the NBC mobile app, NBC website and TikTok), and the winners were Broderick Jones from Kansas for the song ‘Tell Me’, Montana’s Jonah Prill and his song ‘Fire It Up’, and North Dakota’s Chloe Fredericks with ‘Can’t Make You Love Me’.

Here’s a comprehensive review of this week’s twelve competing acts:

Texas understood the assignment. Self-taught musician and producer, 19-year-old Grant Knoche elevated the ASC stage and gave a Grammy-worthy performance with the moody bop ‘Mr Independent’. At times, it felt like watching a music video. In comparison to past performances on the ASC stage, they have bordered on dreary or corny – this performance was engaging, with moments where Grant Knoche literally grabs the camera and moves it around with him. The simple costuming, where Grant and his dancers wear all black, and the stylish lighting make it a sophisticated performance. It’s just very clever, from the staging that has mirrors dotted around the stage and the reveal of the band playing. The catchy hook ‘Mr Independent’ will engrave into your brain by the end of the song – a contender to watch out for.

Louisiana: Brittany Pfantz, ‘Now You Do’

Now you don’t. Brittany Pfantz’s song is just too repetitive, it doesn’t add anything to the song but a confused sense of what the song is actually about. The last minute of the song is where it peaks when the drums begin to shine through the foggy lyrics. There needed to be more substance to the lyrical content. Repeating ‘Now You Do’ for a duration of 2:42 loses its appeal very quickly. It can only possibly be called ‘unique’ if the definition of ‘unique’ also encompasses how a forgettable song can be so bespoke.

Rising country star and ex-firefighter Tyler Braden won the Jury vote with ‘Seventeen’. From what we’ve seen from the past few weeks of ASC, the Jury has shown that they adore an emotional ballad – ‘Seventeen’ is the country edit. Braden’s song is a nostalgic nod to being (you guessed) seventeen years old, with lyrics like ‘We were clinging on to our roots’. ‘Seventeen’ is a song that has been done before, so it didn’t leave a lasting impression. However, it is a wholesome song with a chilled vibe so I can understand the appeal. Shoutout to the surprisingly short guitar solo, and to be honest I’d give Tennessee the Jury vote just for that guitar section.

‘I Don’t Take Pictures Anymore’ is pessimistic bedroom-pop on growing up. On TikTok, Brooke Alexx has over 279.1k followers and 8.6m followers and has been hinting at her ASC performance for quite a while. The song has the potential to go big on TikTok, with an infectious chorus about cutting your hair and becoming more jaded with time. With an iconic wig and robe reveal – the performance element was engaging and packed with surprises.

If you’ve heard Ireland’s 2022 Eurovision entry ‘That’s Rich’ by another performer Brooke, the staging is very similar, set in a childhood bedroom donned with posters barely hanging on the walls. Considering this one is in the Jury’s top 5, and Brooke Alexx’s popularity on TikTok, ‘I Don’t Take Pictures Anymore’ is a possible qualifier.

Dani Brillhart and Colton Jones form pop duo Ni/Co in a scaled-back performance with their ballad ‘The Difference’. They came 3rd in the jury vote, and it’s easy to hear why with their harmonies. Yes, there’s no theatrics to this performance – it is just the bare bones of a stage with two microphones, and as the first duet of ASC, it works. There are still surprises to the performance despite its simple nature, including a kiss at the end of the performance. If we compare this to Eurovision’s past with on-stage kisses they have always been awkward and misplaced in the context of the song, but with Ni/Co it wasn’t necessarily like that. Although, it probably was an attempt to make a memorable moment for the first ASC and etch the song into viewers' minds.

‘Flirt’ is framed as a TikTok song from the get-go. It literally opens with graphics of a live TikTok stream. Latin-pop singer-songwriter Ale Zabala’s song ‘Flirt’ is bubblegum pink, and does tap into the sickly side of TikTok dance music. There is no doubt that this song will accompany some bitesize dance choreography on TikTok, so I think listening to it just once is enough. The staging is reminiscent of if the Pink Ladies were to have a sleepover in 2022 (they’d definitely make TikToks). ‘Flirt’ lacks a bit of soul, it does sound quite generic in the grand scheme of things – to the point where I wonder if a songwriting AI wrote it because the amount of times ‘Boy you a flirt’ is repeated sounds like a malfunction disguised as pop music.

Award-winning and multi-platinum recording artist Jewel channels Cher and ABBA vibes with her ASC song ‘The Story’. Mid-song Jewel announced, “This song is dedicated to anyone whose life might’ve taken a turn for the worse or anybody who's afraid the magic is gone – Take heart, the story is not over yet”. However, the Jury didn’t like this song, placing it at 9th place. This song has some strong Nordic Eurovision energy, and it’d fit right in at the Eurovision Song Contest. Sure, it might feel a little outdated, but it’s an entertaining watch with a heartfelt message and is notably one of the more memorable songs of the night.

EDM meets soul and R&B in ‘Not Alone’, a song that has a flavouring of a Years & Years sound. At times, there are a few off-key vocals and the actual song feels a touch generic. However, that may have more to do with the strange carnivalesque staging. There is a slight dissonance between the staging, song content and singer which just doesn’t quite work. It is by no means the worst song of the night, it just feels disorganised.

Judd Hoos is an independent rock band whose ‘Bad Girl’ might just be a bad song. There are individual elements that are solid such as the consistent vocals and the band members looking like they’re having the time of their lives. However, the actual song just induces cringe when listening to lyrics such as ‘I need a bad girl that’s good for me’. The song doesn’t know what it wants to be, and it leaves a bland aftertaste.

Soul-rock singer Nitro Nitra packs a vocal punch with ‘Train’. Nitro Nitra’s performance ascended to another level with her vocal talent. Thankfully ‘Train’ is one of the few performances that isn’t pop, it’s a soul journey led by Nitro Nitra’s powerful stage presence. Possibly the strongest vocalist of the night, and another contender to make it into the semi-finals.

Sabyu fuses island and stateside musical influences representing the Northern Mariana Islands with ‘Sunsets & Seaturtles’. It’s a transcendental song with a mellow vibe, the pacing of the song feels like the ebb and flow of a tide. Simply armed with a guitar and some beachy projection lighting, island boy Sabyu sings about seasides, sunsets and sea turtles – and it just works.

Riker Lynch is a former R5 member (and eagle-eyed viewers might remember him being a part of the Warblers in Glee) and now finds himself representing Colorado at the American Song Contest with his larger-than-life song ‘Feel the Love’. It’s a fun song, the staging is just confetti cannons and colour splattered everywhere. Riker is accompanied by his sister Rydel (also a former R5 member) on the keys. It’s a vibrant performance, where Riker crowd surfs and walks through the crowd interacting with everyone. Even though the song is very generic and repetitive, the dose of serotonin might see Riker Lynch through to the semi-finals. 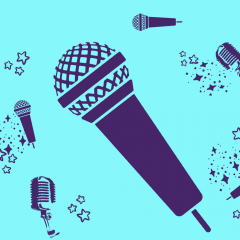 ASC’s third batch of eleven songs is out and we review them all.