Western rap about boots, keytar solos, and flames shooting out of a guitar – ASC's first eleven songs are out and we review them all

From a Western rap about some boots, keytar solos to flames shooting out of electric guitars – it can only mean one thing, American Song Content has arrived, waving its star-spangled banner in our faces.

It’s a bit of a mixed bag with the first eleven songs released. There’s your handful of power ballads, your dance-pop Fuego’s and then there is Wyoming (we’ll get onto the curious case of Wyoming later).

In this week’s heat, only 4 contestants will go through – one selected by a professional jury during the live programme. For this week, that would be Hueston from Rhode Island. For the remaining 3 spots into the next round, the American public will decide their favourites later on in the week.

Here’s a comprehensive review of this week’s eleven competing acts.

Kicking off with Arkansas, Lamb’s song ‘Never Like This’ is a country love song. There are some shaky vocals at the start, likely due to nerves, but who can blame her because it is the first-ever American Song Contest!

The entire song felt like an American Idol final song, with a quite basic concept that felt like it belonged in Hannah Montana: The Movie. However, simplicity may pay off in this contest. It just felt a bit lacklustre.

You might know Michael Bolton, he is an American singer and songwriter who originally performed in the hard rock and heavy metal genres from the 70s and 80s. He was the frontman of the band ‘Blackjack’ and has a whole host of solo albums.

However, ‘Beautiful World’ is a far cry from the music he used to make. ‘Beautiful World’ is a power ballad with uplifting lyrics about rising up and putting the world first. Again, it was a bit like an X-Factor final song with simple starry staging. It felt like the simple staging was intended to balance out the strength of the song, but the song is just really repetitive and bland.

If you remember UK’s 2019 Eurovision entry ‘Bigger Than Us’ by Michael Rice, it has the same aura and that’s not exactly a good sign, given that the UK came last place that year with zero points.

Hip-hop artist UG skywalkin is accompanied by Maxie with a song that has TikTok potential for sure. The song gets stronger as it goes on, especially in the later rap verses.

However, the dancers. Let’s talk about those disorganised dancers. They really put me off the song, I’m not sure what they were doing but it gave me nightmares of Camp Rock choreography.

This is your Eurovision girl boss tune, it even has a keytar solo. It spells out ‘WOMAN’ multiple times in the song, just to remind you what it is about in case you forgot.

The instrumentation in ‘Wonder’ is reminiscent of a Pink song, ironic because the song is drowned in pink costuming and staging. But hey, the audience seemed to love it with the repetitive ‘Hey!’ never getting old. It only really hit when the keytar came out though.

So, I was rooting for this song. When the bass line hit, I thought ‘Ooh, this has Lake Malawi vibes’. Not at all. As soon as the lead singer winked, it (including the vocals) fell flat. There was no energy from the lead vocalist, and the dancers just awkwardly moved in the background like they were at a rave where they only played lullabies.

If I’m being honest, I’m ready to go and leave this song. A running theme is how many of these songs could fit into a Disney Channel Original Movie, and this one is genuinely perfect for Lemonade Mouth antagonists’ band ‘Mudslide Crush’.

A genuine miracle appears in the lineup with Keyone Starr’s ‘Fire’. Starr has a soulful voice and performs like an absolute rockstar. The instrumental of the song is so interesting and catchy, with a really heavy bass line. During the chorus, Starr repeats ‘Fire’ with a powerful delivery multiple times but places emphasis on the second syllable which makes her vocals skyrocket.

Of course, this just had Eurovision energy. Every time Starr sang ‘Fire’ fire shot out of the stage. Oh, and naturally, during the absolutely electric goggle-wearing guitarist solo there were sparks flying everywhere.

Keyone Starr sets the actual stage on fire, and it’s burned into my memory as one of the top songs of the heat.

K-pop musician AleXa has the best staging of the night. In an Alice in Wonderland inspired fantasy, AleXa and her dancers tussled with red ribbons wrapped around and pulling her in all sorts of different directions. I expected fantastic choreography, and AleXa did not disappoint. Constantly moving, engaging with her audience, and even rapping to top it all off – AleXa snapped it up and delivered.

In terms of sound, it is very similar to Cyprus’ fiery 2018 Eurovision entry ‘Fuego’ by Eleni Foureira. This clearly means it’s a banger, and one to look out for on the leadership boards.

Christian Pagán is the first-ever winner of Idol Puerto Rico, and his song ‘Loko’ is very catchy. It will probably blow up on TikTok alongside a memorable dance, however, the actual song didn’t feel memorable beyond the repetitive chorus.

For a multi-talented musician who can play multiple instruments, it would’ve been more engaging to see him interact with the sounds of the song rather than running about the stage and waving his arms.

Hueston’s ‘Held On Too Long’ was chosen by the professional jury to qualify into the next round, it gets the de facto golden ticket that viewers of American Idol or America’s Got Talent will be familiar with.

‘Held On Too Long’ is a ballad with a simple piano track, Hueston’s are strong and stunning. However, I wasn’t too big of a fan of the weird electronic noises in the background. It felt distracting and made me slightly miss the emotional beats of the song, which is a shame because it is quite beautiful.

You know in Back to the Future where Marty performs ‘Johnny B. Goode’ at his parent’s prom? ‘Feel Your Love’ was essentially that, but just meh.

It was a basic concept that tried to use novelty to make it stand out against the crowd. However, the staging was just as mild as the lyrics. Though there were a few redeemable guitar parts, it just probably isn’t enough to get it into the next round.

What can I say, ‘New Boot Goofin’’ is the spirit of Eurovision encapsulated into one truly American song. It is frankly, ridiculous. Ryan Charles is a high-energy Western Rapper, navigating the most ridiculous set design of the night – a Western shoe shop.

How could anyone hate ‘New Boot Goofin’’? It would fit Eurovision to an absolute T, and we’re all robbed that we can’t see this on a massive stage in Turin this year.

This IS American Eurovision. Embracing all that is ridiculous with the show’s format, it is light-hearted and just fun. A true guilty pleasure, that fingers crossed will make it to the next stage just so everyone can witness the madness all over again.

Respectfully, I now pass this song over to the power of TikTok and meme culture. 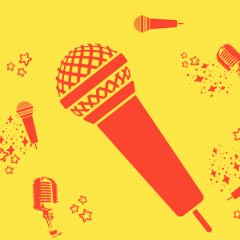 Western rap about boots, keytar solos, and flames shooting out of a guitar – ASC's first eleven songs are out and we review them all