Luke Kempner boldly attests that he does not think he is manly enough. Matched with musings on his journey to fatherhood, Kempner navigates his worries by exemplifying his past. What does it mean to be a man? Luke Kempner doesn’t have a straight-up answer, but he’d argue that he isn’t the best example by indulging us in his drink orders (he’s a fan of white wine spritzers and elderflower gin apparently). However, Kempner largely pins his worries about not being manly enough on his campy musical theatre background.

Throughout the show, Kempner’s gags largely play off his musical theatre interests such as mistaking half-time at a football match as an interval. Sometimes, he’ll break off into song – which may I add, is an absolute touch of excellence in the show. Kempner has a pitch-perfect voice and boundless energy that never dulls. His impromptu breakouts into musical songs from the likes of Les Mis are truly excellent.

Of course, Kempner being known for his impressions does use them in his show to elevate his subject matter. He cycles through a bushtucker trial between the insufferable Donald Trump and spluttering Boris Johnson as they clash heads, explores a bit of Rylan playing off his popular advertisement deals, and then there’s a whole section dedicated to Line of Duty. Perhaps, the highlights of his impressions were poking fun at the sheer amount of Geordies that were in the audience – especially a pair of latecomers who instantly bounced off Kempner’s energy.

The scripted impressions work in the context of the show, however, there are few jokes attached to them. There’s the initial familiarity and reactionary laughs at hearing something so spot on, but that’s where the comedy from the impressions end. When Kempner goes off-script and interacts with the audience using his backlog of voices, that’s where Kempner truly shines.

Macho Macho Man comes to a heartfelt and sincere conclusion on fatherhood, one where he explains the terrifying experience of his daughter being born. Luke Kempner might be most well known for being a funny guy from his impressions, but this show bursts out into song to tell you that his storytelling is as equally powerful. 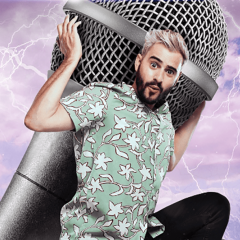