Observing Jayde Adams arrive on stage felt a bit holy. The multi-award-winning Bristolian comedian, actress and upcoming Strictly star arrives unapologetically prophetic and is an absolute vision in those white robes – is it mimicking the Backstreet Boys? The Bible? I’m not sure, but entering to Madonna’s Like a Prayer and giving handshakes out to the front row is a glorious statement in itself.

If you hadn’t gathered already, in this show Jayde Adams is adamant that she can save men – but it’s not what it all seems, it’s not really about saving men. This attempted saviour complex takes us on a wild ride for an entire hour, coming to a cathartic closing where she saves herself – it just gets real outrageous before we get to that.

The start of this set is a bit like a support group, Adams admits that she does like men – it’s just she wants to help them out a bit. It’s hilariously selfless if you think about it, especially after men’s declining dominance these past few centuries. Again, this is a show not all about men though. Jayde in fact turns to look at what a matriarchy would be like, reimagining it through the terror of an all-female Whatsapp group.

What comes next is a series of anecdotes from her lockdown living with her then-boyfriend and best friend (miraculously, a hairdresser), struggles with not looking like Adele anymore, and her recent breakup. Adams does wave at us a piece of juicy celebrity gossip when it comes to her experience sleeping with a top-secret celebrity, jabbing at the nosiness that sensationalism has drilled into us.

Adams then moves to a discussion on sexual discovery post-breakup, one that turns oddly surreal with a vividly memorable (and quite long) mime. If there are any words to describe said mime it would be masturbatory clownery (and that’s really condensing what felt like a solid five minutes of chaos into two words). Safe to say, you won’t find this piece of contemporary choreography on her upcoming run on the family-friendly BBC hit show, Strictly Come Dancing.

Somewhat unexpectedly, this show sweeps into a conclusion that feels quite abrupt. Not in a bad way, it makes complete sense that it does. Jayde Adams speaks of her late sister with her voice cracking and tearing up, Adams pays her homage to her sister in front of us all telling us all about her character, funeral and how it broke her. The disjoint between the content thus far, and this moment in the end, truly speaks of Adams’ writing skills. There’s barely anything directing us to this moment, it’s catharsis.

Catharsis doesn’t need an introduction, nor does grief need a door held open for it – it just happens. It happens before an entire audience in Jayde Adams’ show. A lot like grief, this show isn’t linear, it’s overwhelming and it’s a bit distracting at times too – it’s something that forces us to reevaluate ourselves, and that’s what Jayde Adams does to herself on stage as well. Luminously funny, Jayde Adams is undeniably an absolute star. 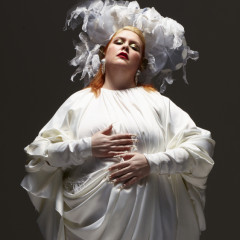 Jayde Adams: Men, I Can Save You