My film inspiration for the Part D of my Bronze Award.

For this task I watched a short film called 'Survivors Guilt' directed and written by Caleb Femi. The monologue in this short film was inspiring to me because of its intimacy and emotiveness. I want to mirror the monologue's intensity and exposure in the voiceover of my short film and to do so I will add more details to my protagonist's experience in the dialogue and go more in-depth into their grief.

I also found the subtle underlying ambient music in this short film to be very effective in immersing me into the protagonist's emotional weight and it has inspired to add ambient music to my own short film because I believe it will give more tone and atmosphere to the scenes. 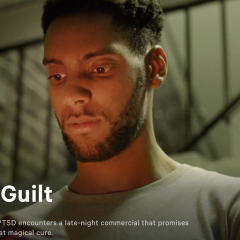 My film inspiration for the Part D of my Bronze Award.