A show about Phish and Fysics.

A show about physics, explained through the medium of dance and voice-over, Particle B is unique at the Adelaide Fringe, as there are very few children's shows (and this is down in the Fringe programme as a children's show) that are brave enough to combine such things. Fewer still would be able to pull it off as effortlessly - or by using a fish in a bowl as the main narrator.

We're greeted by a simple looking set - a dome made of triangles, with plastic flaps and cushions placed throughout it, a table with a chair next to it and that is all. Our performer, Kerttu Pussinen (whose website you can find here), starts the show nervously tugging at a piece of black material. From there the show begins with a bang and a plop, as our next performer is introduced - a small goldfish in a bowl, who also happens to be our narrator (this is a children's show after all). The next 50 minutes is filled with complex scientific ideas broken down into dance and acrobatic routines, each one more daring and exciting than the next - with our performer cleverly utilising the aforementioned cushions and flaps throughout the performance to demonstrate different experiments and concepts.

It is the combining of movement and narration that makes this piece truly shine, with Pussinen effortlessly moving between pieces, and managing to achieve a wonderful rapport with her co-star (the fish), which is remarkable given that the fish is both plastic and a pre-recorded voiceover. The dances themselves range from the impressive and emotive to simplistic and hilarious. Indeed, we were treated to a frenzied start, using the frame, and it was from there that the dances become more thought out and impactful, and each one becoming more and more impressive, and clever as the show progressed - all building up to a fantastic aerial finale.

This piece does have some issues, and while I appreciate that it is trying to tackle some huge ideas that can be difficult to break down into easily understood concepts for children, particle and quantum physics may perhaps not be the right subject matter for a show targeted at children. The pieces can drag on a little, and holding the attention of children can be difficult at the best of times - I will concede at times I did forget which concept we were looking at, and my own attention did begin to waver.

That having been said, this is a show that is deserving of an audience, perhaps not necessarily an audience of children, but certainly an audience of people that appreciate dance, movement and quantum physics. Of course, at the other end of the universe someone has written a review of this show that is completely the opposite in every way - or something like that.

Particle B is on at the Little Theatre at The RCC Fringe until the 17th of March except Mondays. For tickets and more information, please visit the Adelaide Fringe Website. 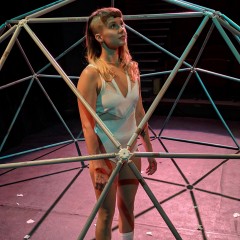 A show about Phish and Fysics.