Acrobatics, Lamingtons, Rolf Harris - finally we have a show that combines all three.

Wow, what a show. I must briefly summarise the core premise before I go on to tell you how absolutely outstanding this show is. Chasing Smoke is a contemporary circus performance, using Dance, Theatre, Acrobatics, Tumbling, Storytelling, Spoken Word, Comedy, Tragedy, Aboriginal Tales, Modern Stories, Satire - I could go on and on. This is a show that has something for everyone, and more than that it is a celebration of the rich history of those first Aboriginal people, and their ancestors that still live on today and are so proud of their heritage. The main theme of the performance is "Who am I", and it focuses mostly on the stories of young people living in Australia now, and linking those stories back to their heritage - from the stories of creation to the oppression of the native people, to more modern tales of hardship.

As previously alluded to, this show is outstanding. The talented cast effortlessly flow between flips, lifts, cartwheels and other such tumbles to beautifully choreographed dance to complex (and daring) circus stunts. These are performers that are not only talented, but also incredibly strong, often with smaller members of the cast lifting and holding one (or more!) of their compatriots. The dances performed are sublime - I am not too proud to admit that on more than one occasion I was moved to tears by the choreography. I don't understand why, but I was.

In stark contrast to the elegant movement the piece is connected by superb scene changes that are light and incredibly funny, it is a pleasant palate cleanser between the deeply emotional, movement based pieces. Not all the stories told carry emotional heft, as some give nods to the audience, and make reference to modern Australian culture for example Rolf Harris' work makes an appearance, to great comedic effect.

On top of the stellar performances the lighting and sound must be mentioned. The soundtrack flows without a single beat falling out of time, with a carefully selected mix of traditional songs and modern tunes creating the perfect atmosphere for each segment. At times it felt as though the soundtrack was as vital to the building of the tension as the interactions between the performances. The lighting too sets the scene for each piece superbly, from creating the vibrant atmosphere of the circus, so increasing moments of complete isolation.

To summarise, this is a show that draws you in, makes you laugh, and then breaks your heart - as such this show is an Adelaide Fringe must see. There's nothing about this show to not enjoy - a slight warning must be said for young children as there is a section that uses rude gestures (admittedly, to great effect), but aside from that this show is inoffensive, superbly crafted, and very watchable! Sit near the front for a bit of Lamington at the end of the show - very meaningful, very delicious.

Chasing Smoke is  no longer running at the Adelaide Fringe, but more information about Casus Circus can be found at casus.com.au. 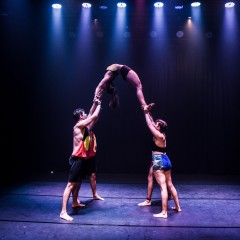 Acrobatics, Lamingtons, Rolf Harris - finally we have a show that combines all three.