An interactive game show, where Werewolves must have the wherewithal to be aware-wolves.

The first things that struck me, as we entered the room was the joyous parochial music playing as we (the players) sat down and the striking presence of our host for the evening Mr Nicholas Phillips, a tall fellow (made all the taller by the top hat that he wears as the audience come in), with a magnificent beard, well curled mustache and a humongous, black fur coat. It made for a very imposing start indeed. Once we were all settled he began setting the scene, and we had the rules of the game explained to us, in his gentle and soothing voice. After explaining the rules, and giving people their character cards (of which there are several) the game began. The basics of the game are as such:

Now, if I were a petty man I would knock off a star for being the second person killed, but as I was a Werewolf, and I was killed by the character "The Hunter", I will consider it part of the experience. When (if) you are killed off by either villagers or werewolves you are offered a conciliatory glass of bubbles, which is very welcome indeed - and adds to the overall enjoyment of watching the rest of the game. Do not let the fear of dying early put you off from seeing this show, as the dead can see all that happens, and it makes for incredibly interesting watching - the tension at points can become unbearable, as the villagers gang up on the wrong person who in turn attempts to state their case as to why they're innocent. It brings to mind the Salem Witch Trials.

The show is simple, yes, but is exactly what it advertises itself to be. This is a bold choice of show to bring to any fringe festival - but a welcome addition and can be a nice hour (or so) of respite during your packed fringe schedule. Unusually, the success and enjoyment of this show is almost entirely dependent on the audience, as a smaller audience will result in a less stressful experience, and far shorter games - and believe me this can get incredibly stressful.

Phillips' storytelling is superb, as is his world building. I felt truly immersed within the world that he set us in, and he had me on tenterhooks each round - regardless of the fact that I was already dead - he is a master of holding your attention and capturing your imagination.

While this is an unusual choice of show to add to your calendar I heartily recommend that you go out of your way to get a seat - for those with artists passes there are sometimes seats available for free so you have no excuse to not go! Further, if you're looking to make some new friends or desperately searching for a fun date idea this is ideal.

Werewolves is on every day until the 16th of March at Drama Llama (Rhino Room), Coventry Library (Stirling Fringe), and WP Rogers (RCC Fringe) except Mondays. For tickets and more information please visit the Adelaide Fringe Website. 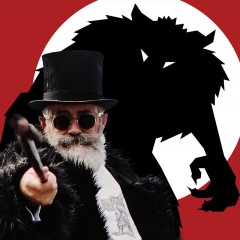 An interactive game show, where Werewolves must have the wherewithal to be aware-wolves.