Voice MagReviewsOmar Hamdi: In the V…

The welsh-Egyptian storms the show.

Omar Hamdi is a comedian I can only describe as flamboyantly funny. His show, In the Valleys of the Kings, is a must see. The main theme I gathered from the show was men and masculinity. It also examined the differences of masculinity through different generations.

He describes the difference in culture and tries to un-cover the mystery of his father's recent message to him.

Religious jokes are always the hardest to do. Audiences may not be receptive to it, and leave the room in an awkward silence, but Omar doesn't shy away from that subject. He managed to touch on religions in a respectable way and still make everyone laugh. He even made a few ISIS and terrorist jokes which were entertaining.

He emphasised on how important it is for young boys to have fathers so they can have a role model to follow.

He took the time to make some valuable points. He really hit the nail on the head with the importance of male role models and how it can easily influence men at a young age. Although he can be funny, he's shown that he's capable of saying some inspiring truth which I believe should be shared to the rest of society. 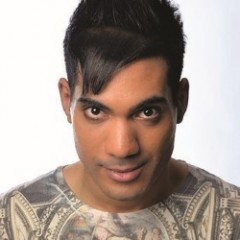 Omar Hamdi: In the Valleys of the Kings

The welsh-Egyptian storms the show.