If you ever wondered what Ron Burgundy would be like if he tried physical-improv comedy, wonder no further, Vegas nocturne is outrageously funny and so really unpredictable. If there is any show that can catch you off-guard, Vegas nocturne ticks that box.

So this is an American improv group with outrageous characters who aren't afraid to get physical. There is a lot of audience interaction, all of which added to the shows unpredictable nature.

I came in with no expectations and no knowledge of this show. As I walked in the room one of the actors were putting their cloths back on. At that point I assumed the show had ready started. What I should have done was brace myself for what to come. I confess I did feel a sense of tension and danger when one man jumped high enough to hit the ceiling, and when they tried to hang from the ceiling pipes just to "test" how sturdy they are.

The best way to describe it would be OOC (out of control), purely for the fact that they physically stop the show to prevent people from walking out, making the situation quite awkward for everyone else. To be honest I'm not sure how serious they were, just for how physical they got with them. Every time someone leaves they would play their leaving song which was funny.

The singing and music was the best feature of the show. The singing was mostly improvised and went well with what was going on.

Overall it was a good show but the controversial and very physical action did distract me from the jokes and laughter but for a physical comedy act they do very well in my book.

Vegas Nocturne is performing very day (not the 17th) at the Pleasance Courtyard. For tickets and more information, visit the Fringe website. 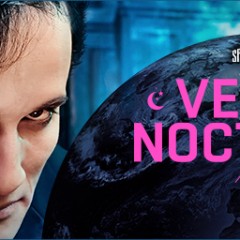