I told you last year they were too good not to be making money from their time at the Fringe, and I was right. Their work is going in the right direction.

In the Pleasance This space, the duo used the tiny stage to perform sketches which were erudite and relentlessly funny. They went far beyond typical ethnic humour – though there was a good deal (and quality) of that – and had a great amount of wide-ranging and versatile sketches. What was striking about the routine was its ingenuity. There was a great deal of quick fire sketches and gags which were meta and self-referential, a bit post-modern and all that stuff. But at the same time, they all struck the right balance, so that they were comprehensible to everyone, the content not seeming like pretentious bile.

They turned the tables on their ethnic roles and then turned them back again, broke that fourth wall barrier between themselves and the audience, played poets and stand-up comedians, actors and every other performer in between.

The finale alone is worth mentioning, what Paul and Luke were saying could barely be heard over the half-a-minute of laughter from the crowd as everything that the show set up unravelled like a comedy version of any crime or investigation drama (except Midsummer Murders!). The unravelling was innovative and blindingly eye-opening.

They decided to involve me in the proceedings as a lonely Northerner in the front row. They called my name fake, dashed my dreams of being a writer, and mocked my poor eyesight. This was excusable for a number of reasons: they didn't throw out some predictable gag about my own Asian heritage; it was, frankly, all quite true; and finally, they had the consideration to remember all the things I had told them about myself and to use them not only in a 'bit' on the spot, but to bring the facts back out throughout the show. This made me feel special.

All this begged the question of how, a few times, with all the smarts and clear and thoughtful writing behind the show, some gags managed to fall really very flat. One gag which was particularly well setup - by addressing the art of setting up jokes based on things mentioned earlier in the show - did not get a laugh. This wasn't because it was too built up or even that, conversely, it became predictable. It was just because its conclusion was a bit banal. Where these, however seldom, cropped up, they were so clear. They sent an alarm off in my head screaming 'why?!'.

Consistency is key. They have this mind-blowingly original show but every so often the heart rate of its innovation just skipped a beat. I left, however, fully aware that they are now achingly close to that fifth star.

Catch In Cahoots: Two White Guys at the Pleasance This just next door to the Pleasance Courtyard at 19:15 for the rest of the Fringe - https://edinburghfestival.list.co.uk/article/73187-in-cahoots-two-white-guys/ 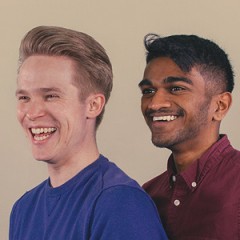 I told you last year they were too good not to be making money from their time at the Fringe, and I was right. Their work is going in the right direction.