Voice MagBlogsActivism for the Ear…

In the week we learnt that 2018 was the year that saw the most people taking part in poetry and spoken word in the 21st century - allegedly down to its appeal among politically empowered youth - we take to task the role of the podcast as a source for clarity. With bias and self-interest governing the journalistic landscape, it feels like the podcast is where we can now seek truth - be it the truth we want to hear or not.

“When it comes to the people who are commissioning our culture…they’re not yet ready to be held accountable for what they create. In the meantime, DIY-ing may be the most surefire way to secure the culture that you want to see.”

- Reni Eddo-Lodge, author and host of the About Race podcast (“8. The Anti-Racist Renaissance”)

The Amnesty SoundCloud channel is a very muddled podcast, or collection of various podcasts, so a channel more than anything. They tackle a tonne of topics, sometimes doing one-offs on a subject, and other times creating a mini-series on a singular big idea. For example, one of their mini-series two years ago was the three episode ‘Being Transgender’ and then four episodes in the #NotPowerless collection of interviews.

Careering towards a bit more structure lately, the two series of ‘In Their Own Words’ speak to new and exciting activists about their work across different areas in each episode. An intriguing approach to hearing from new and diverse voices under the Amnesty International reputation.

Fearne Cotton’s move to podcasting has been wildly popular (regularly reaching well into the podcast global top 10 when in-season) for going very much against the grain. Given her glossy-studio-Celebrity Juice reputation, you might expect Cotton talking to a predictable list of celebs about their mental health; fame and its implications being a common topic nowadays. Cotton’s USP is that she speaks to a great deal many non-celebrity figures such as representatives from mental health charities and even people who have gotten in touch just because they’ve had something to say. Cotton is singularly talented in deeply penetrative conversations that get into each unique manifestation of mental ill health that come in the form of her guests.

The Stanford podcast takes a more academic slant, but it’s helpful to be studious with these things. There is also the added benefit of it being the most wide-ranging on this list – it legitimately covers everything. Technology, human rights, crime and justice, the environment, all the issues! It makes the list for taking a truly global view of things rather than an solely Western one, and also because of the variety of experts in each discussion. It hosts some really in-depth talks, from which an enormous amount can be learnt.

About Race with Reni Eddo-Lodge

Following on from her wildly successful, Jhalak award winning non-fiction book, Why I’m No Longer Talking To White People About Race, Eddo-Lodge expanded the discussion into a podcast. With some production issues that could be ironed out to make her conversations come across more fluid, About Race’s first season nevertheless manages to succinctly get to the bedrock of many of the contemporary issues that are faced by people of colour as well as, where possible, leaning towards the possibility of a solution.

How To Be A Girl with Marlo Mack

Marlo Mack makes HTBAG with her transgender daughter who they describe as a girl with a penis. It is more anecdotal than activist but, in the action of being so open in a straightforward way about their everyday lives, this podcast offers a great deal to the conversation around transgender children. Topics have varied from the positively everyday to more impactful, such as religion and anatomy. Sporadically released, Mack’s message of leaving children to express their will on the subject of gender is freeing without being forceful or skirting around the nitty-gritty.

We Need To Talk About with Jolyon Rubenstein

This Spotify Original is a political podcast with a UK and Leftist bent, and Rubenstein (The Revolution Will Be Televised, Ministry of Justice) is able to procure a wide range of guests to comment on the latest developments in the political sphere. This includes MPs, political figures and correspondents as well as comedians. While the choice of contributors could be used to interrogate politics in a less partisan way, the interrogations consistently lead to pearls of wisdom about the nature of the treatment of people and systemic inequality.

One of the longest-running sex and love podcasts on the internet, author and journalist Dan Savage’s Savage Lovecast has perfected the approach of using an episode to address one of the minutiae of the wider ‘dating’ experience in order not to run out of content too quickly. Taking his sex and relationship advice column to podcast form, he has no end of listeners submitting their sex and romance ills for Savage’s process. For this reason he remains relevant: from stories of singular encounters on Grindr to polyamorous relationships, Savage encourages transparency, experimentation and unending respect in relationships – sexual or otherwise.

The Guilty Feminist with Deborah Frances-White

The internet’s foremost feminist podcast takes the former feminism of the academic and intellectual sphere and attempts to make it all more relative and easier. It’s simple really.  Frances-White gets women of profile and the odd journalist or academic to look at issues faced by women or look at general topics through a feminist lens - often in the funniest ways, but also very seriously. Previous guests include the team behind the formative collection of essays Feminists Don’t Wear Pink And Other Lies. Intersectional and open minded, TGF’s popularity speaks for itself.

Mothers of Invention with Mary Robinson and Maeve Higgins

Yes, Mary Robinson, the former President of Ireland, the first woman to hold the office, and altogether reformative stalwart of the country. She co-hosts with comedian Maeve Higgins who uses her stand-up to challenge numerous social issues. Together they talk to and about women who are making strides in combating climate change all around the world. Presumably due to Robinson’s position in international politics, their first season’s guests have been truly global as that’s the only way to have a constructive conversation about the environment..

One for the youth, This Is Spoke addresses a new issue every episode with relevant guests from literature and music such as Munroe Bergdorf, MNEK, Maverick Sabre and, again, the Feminists Don’t Wear Pink team. Chidera and Suli are transparent about interrogating what the guests know about their topics, as well as the need to learn more about the issues for themselves. Things get deep as discussions are had and they all try to learn a little more.

Transgeneral with Chelsey and Charlotte

A special mention because, sadly, Transgeneral is no longer being produced. The hilarious team have gone on to different employment routes but not without having left an indelible mark on the internet’s conversation about the trans experience. With a characteristic nonchalance but with the keen ability to swerve back to the point, if there was one, the Transgeneral podcast got deep into what difficulties that trans people might face based on their own experiences but without alleging that they were speaking for the whole community. 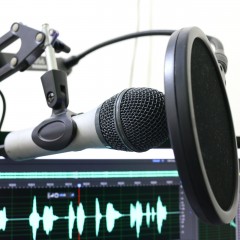 Activism for the Ears: ten activist podcasts to make you think