The Golden Age of 90s wasn’t just iconic - it was influential. Ranging from the impressive grunge scene to the birth of the Millenials, here are 10 songs that reflect a decade of fun and progression, and for many, a trip down memory lane.

OK, you may be a bit reluctant to listen to this song as your annoying Uncle Rob keeps shouting at the top of his lungs “TUUUUNE!” every time it comes on during a 1990s rave playlist. But he has his reasons - once this track gets going, you can’t help but punch the air in a repetitive manner like an idiot. After gaining notoriety after being featured in Trainspotting, it remains a festival favourite.

This was the iconic debut hit single that kicked off a career filled with controversy, mass media attention and questionable haircuts. Britney was just 16 when her debut hit the radio stations in 1998, and whether you love it or hate it, it remains a staple in pop songwriting - when pop songwriting was still unique and diverse compared to the machinations that bombard us in 2018.

Oh, Alanis, who wronged you so much?! Before Taylor Swift, Adele or even Amy Winehouse came along, Alanis Morissette paved the way to success for women in music in the mid 1990s when she released Jagged Little Pill. Having struggled with various eating disorders, failed relationships and poor success of her early teen-pop years, Alanis became the queen of alt-rock angst as she hit us with this Grammy-winning song that screams with anger and bitterness - a feeling we all know too well.

Before emo became full being a decade later, it happily rode upon the success of alternative rock with the wonderful Weezer. “Say It Ain’t So” became an anthem for the sad young people who are faced with the ugliness of life, and it set the band up for years of success that is still celebrated to this very day.

Punk rock was still an underground phenomenon before Green Day dropped Dookie in 1994, which popularised the genre and propelled the band into worldwide fame. “Basket Case” surprisingly broke the punk tradition of rebellious politics with Billie Joe Armstrong detailing his struggles with anxiety - a message that resonates with angsty teens everywhere.

The Smashing Pumpkins were one of the bands that broke the rules of alt-rock and pushed it to the limits via experimentation and Billy Corgan’s ambition. It gave them a Golden Age of success and critical acclaim during the early to mid 1990s, especially with their most celebrated double-album Mellon Collie and the Infinite Sadness. “Bullet with Butterfly Wings” rode upon that success and recreated the metallic grunge sound that drove listeners into a head-banging craze.

Whilst grunge was ruling the world in 1990s, the British public got tired of being angry all the time. Thus, the Britpop movement was born. Oasis are considered seminal Britpop icons, despite the epic Britpop war between them and Blur (another important band of the 1990s), plus the equally pretentious Gallagher brothers themselves. Therefore, the guitar-driven debut single “Supersonic” remains a strong reminder of their impact on not just the UK, but the entire world.

OK Computer was a significant turning point for Radiohead, as prior to its release they had been pigeonholed into the generic 90’s alternative rock sound, and were desperately trying to abandon that label. It not only gave them success and made them one of greatest artists of all time, but it pretty much laid the blueprint for music for the upcoming 21st Century, inspiring hundreds of artists, and providing a dark and isolated insight of the near future.

“Paranoid Android”, Radiohead’s very own “Bohemian Rhapsody”, collates all of that musical goodness and provides us with a band that successfully defied the odds and became an artistic force to reckon with.

Speaking of important albums, The Miseducation of Ms. Lauryn Hill allowed the aforementioned singer/rapper to perfect the sound of her previous band Fugees, and gave us a wonderful contribution to the neo-soul fusion genre. “Doo Wop (That Thing)” captures those feminist themes by warning men and women not to let “that thing” ruin their lives. Whatever that means is up to, but you can’t help but sing and dance along with soul and sass!

Saving the best to last - Nirvana pretty much single-handedly changed the face of music forever over their short 7-year run. Despite the band’s eventual dislike for the song, and the hipsters who proudly state “Bleach/In Utero/this song is better!”, Nirvana wouldn’t have gotten anywhere without the cultural impact of “Smells Like Teen Spirit” and their defining Nevermind album.

Who would’ve thought that a simple 3-chord rock song could break down the barriers of music and bring alternative music to the mainstream, speaking for an angry, isolated and nihilistic generation of young people? It completely blows my mind. 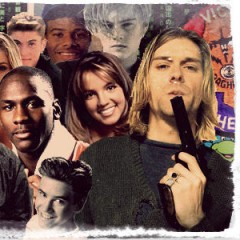 The Golden Age of 90s wasn’t just iconic - it was influential. Ranging from the impressive grunge scene to the birth of the Millenials, here are 10 songs that reflect a decade of fun and progression, and for many, a trip down memory lane.