A decade that had almost everything - big hair, neon lights, synth pop, ballads, Michael Jackson, double denim (ew), shell suits (EWW), MTV and the birth of CDs! Above all else was the music that continues to be loved by many - here are 10 songs that hit us hard with the 1980’s nostalgia.

Their 1985 effort The Head on the Door was a strong pop-inspired departure from their rather gloomy goth-rock days. Nevertheless it was well-received by the British press and is now considered one of the most important steps towards alternative rock. “Close To Me”, in my opinion, captures the albums idiosyncrasy at its best, reminding us of the impact of The Cure on modern rock.

One of the most successful female singers of all time, Madonna was a symbol of rebellion for many young girls of the 80s. “Like a Prayer” captures this as we see Madonna inspirationally declaring her love in an epic gospel-inspired pop hit that remains a radio favourite. Just listen to Heart radio all day!

Sting, along with the rest of the band, kicked down the door for new wave music in the 70s, making itself a nice home in the 80s and inspired gazillions of artists. “Every Breath You Take” was the song that saw The Police go out with a bang, as three years later the band would part ways. It became their defining single, and despite the stalking-related content, “Every Breath You Take” surprisingly became an anthem for the broken hearts and unrequited lovers everywhere.

Speaking of anthems, one of our favourite celebrity activists Cyndi Lauper gave a voice to women and girls everywhere when she dropped this upbeat feminist hit in 1983. It tells that girls just want to be free to do what they want and be whoever they want, a battle that still sadly is having to be fought today.

GNR were one of the bands responsible for the reinvention of rock ’n’ roll music in the 1980s, giving it a much heavier and edgier sound with a Rolling Stones-esque rebellious aesthetic. “Sweet Child Of Mine” is a classic guitar song with a recognizable riff that gives the listener a pleasurable romantic experience. Just don’t set it as the sound of your alarm at 6am everyday like I did when I was 14...

Now THIS is an 80’s anthem! Whilst it lacks the typical jangly guitar work of Johnny Marr, the production and overall sound was ahead of its time, as the iconic sliding technique harkens to a certain musical explosion in the next decade. Even though they were around for no more than four years, The Smiths continues to have an influence on modern musicians alike, and they remain a vital voice for lonely and misanthropic teenagers everywhere.

Eurythmics were the synth-pop and new-wave champions of their heydays. In fact, “Sweet Dreams” became their signature hit (arguably) and is regarded as one of the greatest songs of all time. Whilst the duo have since parted ways, Lennox continues to perform this song live and remains a popular radio-hit today.

The King of Pop certainly earned that title when he released Thriller in 1982, breaking down racial barriers and becoming the best selling album of all time, as well as Jackson becoming the best selling artist. “Billie Jean”, alongside the album’s titular track, exemplifies the album perfectly with it’s disco vibes and romantic lyrics that details an affair. Jackson may be gone, but he is certainly not forgotten.

After the dissolution of Joy Division and the tragic death of lead singer Ian Curtis, the band very quickly got over their grief, brushed themselves off, and reformed as New Order, who would go on to become on of the most successful and influential dance acts of the 20th Century. “Blue Monday”, their signature single, is one of the most acclaimed songs of all time with its powerful beat intro and electronic sound that continues to be celebrated by many.

I’ll admit - this list was not easy as there are SO many other songs that are just as, if not more, iconic. So why don’t you tell us what songs defined the 1980s for you? We also have articles that cover the 60s and 70s, if retro is your jam! 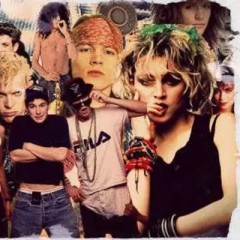 A decade that had almost everything - big hair, neon lights, synth pop, ballads, Michael Jackson, double denim (ew), shell suits (EWW), MTV and the birth of CDs! Above all else was the music that continues to be loved by many - here are 10 songs that hit us hard with the 1980’s nostalgia.