Norwich Pride celebrated its 10th anniversary this year and we spoke to Nick O'Brien, who helped start it. This interview was conducted at the end of July.

Tell us about yourself and your job.

My name is Nick O'Brien, and I work as the Education and Arts Lead for Norwich Pride, which I helped to start 10 years ago (2018 was the 10th year).

How did you first become involved?

Norwich never had a Pride prior to 2009 - people had to travel to a bigger city like London or Manchester for their Pride, which isn’t ideal considering the cost of travel and accessibility. We wanted to bring Pride to the local community of Norwich, so we had a meeting about it with the initial aim to make it both a protest and a celebration.

Norwich Pride was last weekend, how did it go?

Being asked what the big difference is between 2008 and this year, the entire city has massively got involved and bought into Pride, with many shops decorating windows and doing special offers for pride, which really helps to spread the message.

On that note, do you think Pride has become too commercialised?

What role does Norwich play in the gay scene?

Norwich Pride has become a great source of inspiration - it makes people more confident and “proud”, and as a result people feel that they can be supported more. Norwich has changed a lot over the years; it's become a very vibrant and good city, and the people have become a lot more liberal (as with almost everywhere else in the country), with great support coming from non-LGBT organisations as well as the LGBT venues which do a great job.

What are the main challenges facing the LGBTQ community today? Do you feel there has been progress in recent years?

There has been tonnes of progress in recent years, so Pride has become more of a celebration of achievement - especially equal marriage - so nowadays young people can be more themselves than ever before. Despite this, we still have issues - trans people are still facing oppression, for example, but hopefully with the amended Gender Recognition Act, we can do a lot more to help more trans kids. There are also still a lot of people who still are not comfortable with LGBT, as seen with homophobia in football and in workplaces.

What role do you think the arts can play in raising the profile of LGBT conversations?

We’re very keen on the arts because of how important it is; it allows people to express themselves and allow others to relate to them. That’s why we always aim to promote local LGBT artists, theatre and art exhibitions whenever and wherever we can.

What advice would you give to young people coming out?

Be confident and be yourself - my advice is to be comfortable, and build a good support network of friends and family, and if available get some help at school, and remember to take your time. You don’t need to put labels on how you feel until you are ready.

What tips do you have for someone to get the most out of Pride?

Well it’s different for people who are used to Pride to those who new to it - but if you are new to it, make sure you’re safe and have people to go with, because there is absolutely loads of people at Pride and it’s very easy to get lost. But, other than that, throw yourself into it, have a great time and be yourself. And don’t forget to support other local Pride events that are starting up for the first time! 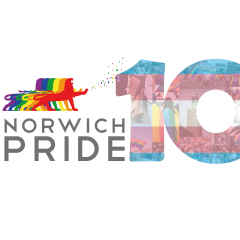 Norwich Pride celebrated its 10th anniversary this year and we spoke to Nick O'Brien, who helped start it. This interview was conducted at the end of July.