Punk rock to prog rock, disco to funk, hard rock to glam rock, and the birth of heavy metal - the 1970s saw the sounds of the 1960s evolve and diversify in strange and new ways. Here are 10 of those songs that defined the 1970s.

It was the last number one single in the 1970s in the UK Charts, so it just about hangs on to this list nicely. "Another Brick in the Wall" symbolises Pink Floyd perfectly, with anti-establishment lyrics mixed in with a disco beat and a progressive rock beauty. This song marks their album The Wall as a masterpiece, and Pink Floyd themselves as prog-rock legends.

We need to address the band that laid out the blueprint for heavy metal - Led Zeppelin.
With this epic 8-minute track, they certified themselves as rock gods by fusing Robert Plant's luxurious Lord of the Rings-inspired lyrics and Jimmy Page's guitar skills that creates a work of art, with suggestions of Satanic messages and a devilish beauty that refuses to die down.

Never mind the probably-most-important-prog-rock-bands-of-all-time-that-set-a-standard-for-rock-music-but-whatever IT'S THE SEX PISTOLS! The 1970s was the birthplace of punk rock, and the Sex Pistols was the angry child when they caused havoc and controversy with their debut single - giving a vital voice to the angry teenagers who were fed up with the government (has that changed?) and wanted to break things. Despite their short existence, they left a huge mark on the underground music scene and set a chain reaction for a punk revolution that lasted for years to come.

Before there was punk rock, there was the Glam Rock era. These precious few years challenged gender boundaries and pushed sexuality to the limit. David Bowie was the king of Glam, and this 1974 song is just one of many songs that forms a part of his epic catalogue, with earworms that encourage the youth of the 1970s to defy everything they know and rock out! David Bowie may have left behind his glam rock years, but this, plus what he would go on to later achieve in his life, would mark him as an influential rock icon that will live on forever in our hearts.

If you didn't try and sing this song as loud as you possibly can, no matter if you were good or bad (I'm very bad) at least once in your lives, where have you been!? The song speaks for itself - Freddie's booming voice, abstract lyrics that make no sense, irregular song structure, it's opera, it's rock, it is one of THE greatest songs of all time that has survived generations and continues to be loved by millions, whether you're a Queen fan or not.

The late 1970s was an interesting time for punk rock, as it moved in creative and experimental directions spearheaded by another significant, yet often overlooked, musical movement. Post-punk is Punk Rock's moody teenage son (it'll be a few decades before people whack out the eyeliner) that took the energy and spirit of punk rock & channeled it using artistic and unique methods. Then along came Siouxsie and the Banshees!

Their 1979 debut album The Scream is seen by critics as a landmark of post-punk, and "Hong-Kong Garden" summarises it perfectly with anti-racist lyrics, unorthodox guitar playing and Siouxsie Sioux's unique vocals that provide an important moment for alternative rock, way before alternative rock came to full being over a decade later.

New Wave, on the other hand, was Post-punk's boppier and cheeky little sister that continued with the experimentation, but took more inspiration from pop rather than punk, and in just a few years time the genre would define the 1980s. Blondie were massively significant, as their single "Heart of Glass" took notes from disco and pop that set themselves apart from the underground music scene. Combine that with Debbie Harry's cool girl image, you have a band that gave rock-n-roll a girl power vibe that continues to this very day.

Everybody's favourite Swedish pop group sent the whole world crazy with their iconic hit that struck a chord with teenagers of the 1970s. The band's effort to creating music was truly felt in each song they created, and although this, along with the pressures of fame, would eventually lead to heartbreak plus the end of the band, their legacy and impact on pop music is still felt to this very day.

Afros, glittery trousers, funky shirts and a cheeky rhythm - the Disco era of the 1970s was golden. The Bee Gees encapsulated the disco era after a change from a Beatle-esque sound in the 1960s in this entire song. "Stayin' Alive" encapsulates the human spirit with its uplifting lyrics that will get people to the groove as soon as the beat kicks in.

For all the broken hearts and dying relationships, this one is for you. "Go Your Own Way" was written by Lindsey Buckingham as a message to Stevie Nicks after the end of their relationship. With its powerhouse trio of vocals and rock-n-roll vibes, it is a classic and iconic pop rock tune that continues to speak for generations. 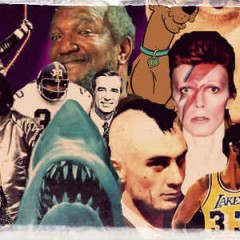 Punk rock to prog rock, disco to funk, hard rock to glam rock, and the birth of heavy metal - the 1970s saw the sounds of the 1960s evolve and diversify in strange and new ways. Here are 10 of those songs that defined the 1970s.