Voice MagBlogsHow to write a scree…

In this guide, we’ll go over the basics of screenwriting and explain how to turn that great story idea into your first script.

It can be very easy to feel intimidated by the thought of writing a screenplay, especially if you’ve never done it before. Turning your story idea into an actual first draft is a behemoth task, and it’s only made worse by all of the formatting and rules around screenwriting. Thankfully, we’ve put together this handy step-by-step guide to make it as easy as possible for you. Not everyone writes in the same way or does things in the same order, but this should serve as an excellent starting point for a first-timer.

All screenplays are written and formatted in specific ways. One page equals one minute of screen time, and for that to be universally true, all scripts have to follow the same rules. The font used is 12 pt Courier with single line spacing, as Courier is a monospaced font, meaning every letter and character are the same width. The left hand margin should be 1.5 inches (it can also be 1.75, but 1.5 is fine) while the other three margins should be 1 inch. Since one page equals one minute, you should aim to have your screenplay be between 90 and 120 pages long.

A common mistake beginners make is copying the style of screenplays they find online, but a lot of the scripts that are available are shooting scripts, not spec scripts. (The latter is what you should be writing, assuming you’re writing in the hopes of finding a producer.) The difference is that shooting scripts will include things like camerawork, shot types, and editing, and as tempting as it may be to put in those details, it is not the screenwriter's job to dictate direction (that responsibility belongs to – you guessed it – the director). Spec scripts focus on plot, characterisation, and dramatic action and can only at best imply visual style – “a silhouetted figure appears on the distant horizon,” for example, suggests that it would be a long shot. Spec scripts also do not number scenes, while shooting scripts do because they need to plan the shooting schedule. The only exception to this is the very beginning and end of a spec script, which starts and ends with FADE IN and FADE OUT. With that in mind there are five main components of a screenplay: scene heading, scene action, character name, dialogue, and parentheticals.

The details of the location go in the scene heading (which is also known as a slugline). It is always written in capitals, and always includes: INT. or EXT. (interior or exterior), the location, and DAY or NIGHT – and always in that order. For example, “INT. LIBRARY - DAY” means the scene takes place inside a library during the day, and “EXT. HOSPITAL - NIGHT” would mean the scene takes place outside a hospital at night. If several scenes take place in the same location, you can add a little extra, for example “INT. HOSPITAL - RECEPTION - NIGHT” can help to differentiate between rooms in the hospital. Always try to keep your sluglines as brief as possible though (which is also a good rule for screenplays in general). Secondary scene headings can also be used to indicate more specific locations within a larger space, as well as the passing of time (e.g. LATER). Secondary scene headings are contained within the scene action and written in all caps on a new line, and instead of writing the entire scene heading again, they contain only the location.

Scene action is also known as scene description and it is essentially used to describe anything that happens on screen, and thus will usually make up the bulk of the screenplay. The most important thing to remember for scene action is that it is always written in the present tense in third person narration. It is also always active, not passive. For example, you would say “He stands,” not “He is standing.”

Before you write any dialogue, you have to introduce the characters. Whenever a character is introduced, their name is written in capitals, including minor characters that don’t have any lines and aren’t a named character (e.g. POSTMAN). Characters (especially main characters) are typically introduced with some brief information about their age, personality, or appearance in parentheses. For example: “DAVID (40, BALD, FACE AND NECK TATTOOS).”

Whenever someone speaks, their lines are written as dialogue. Dialogue comes after character names (which signify who is speaking) and is left-aligned and indented by 1 inch from both margins. If the dialogue is meant to be heard as a voiceover, you add (V.O.) after the character name, or (O.S.) if it is meant to be heard off-screen, such as “DAVID (O.S.),” and then write the dialogue as normal.

One of the most common downfalls of any script is excessive exposition. It might be tempting to get as much info out there as you can, especially if you need to explain someone’s backstory, but it’s very easy for dialogue to sound overly expository and it can easily take someone out of a film. As an example: “Hi, David! How’ve you been? I was very sorry to hear that Sally passed away, I know you and her were very close, especially after that incident in Florence.” That doesn’t sound remotely realistic, and at that point you might as well have the director himself walk onto the screen and speak to the audience directly to explain that David and Sally were close, that Sally passed away, and that something important happened in Florence. Bad exposition sounds unnatural and forced and must be avoided at all costs. It can be difficult to get the balance right, but when it comes to expository dialogue, constantly remind yourself that if it doesn’t sound like something you might say in real life, it’s probably too much.

Parentheticals should be used as sparingly as possible and only when it reveals something important to plot action or characterisation. You might put “(sarcastically)” before some dialogue – but after the character name – for example, to make sure it is clear that the character is not serious.

As well as master scene headings and secondary scene headings, it is useful to know certain special scene headings. Inserts, montage, and flashbacks are all structured in specific ways and are common enough that you will need to know how to write them.

Inserts are used for showing text and images that may appear on screen, for example if someone is using a mobile phone and their messages need to be seen by the audience. You write inserts as part of the scene action by typing, for example, “INSERT ON NOTE:” followed by what you want the note to say.

Montage is a very useful tool and is used more often than you might realise. It is rather simple to write: you type “BEGIN MONTAGE,” list the shots you want to include in your montage, and then type “END MONTAGE” at the end. The latter isn’t always necessary if it’s obvious that the montage has ended, for example if you cut to a different location and a new scene begins.

You need to be careful with flashbacks. They can obviously serve an important purpose, but a common rookie mistake is shoehorning them in where they aren’t needed, and it comes across as nothing but lazy exposition. If you need to put a flashback in that actually serves a dramatic purpose, you can type “FLASHBACK” as a secondary heading and “END FLASHBACK” to indicate when it’s over, or you can include it in the scene heading. “INT. HOSPITAL - NIGHT (FLASHBACK)” or a temporal indicator such as “INT. HOSPITAL - NIGHT (FIVE YEARS EARLIER)” are both acceptable.

That more or less covers everything! To quickly summarise, remember that screenplays are always written in Courier 12 point font with a 1.5 inch margin on the left and 1 inch on the top, right, and bottom. One page is one minute, so aim for 90-120 pages. The main components are scene heading (also known as a slugline), scene action, character name, dialogue, and parentheticals. These are all formatted in specific ways, so if it all seems a bit difficult to remember, there is plenty of software you can get that takes care of all the formatting for you, which is incredibly helpful and stops you from spending half your time making sure it’s all structured correctly. Celtx and Final Draft are some of the best you can get for this, but it could be worth trying a few to see which suits you best. Happy writing! 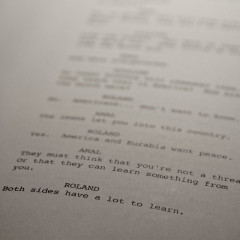 How to write a screenplay

In this guide, we’ll go over the basics of screenwriting and explain how to turn that great story idea into your first script.