This HBO Max special saw the cast of the hit sitcom Friends reunite on camera for the first time in over 15 years. Was it worth the hype?

I am a huge Friends fan. It is my main comfort show, I grew up watching it and have lost count of how many rewatches I’ve done of all 10 seasons. So, needless to say, I had high expectations for this reunion special.

HBO may as well have added the tagline ‘How well have they aged?’ to this reunion, as this was likely what most viewers were talking about. Discussions around the cast’s older appearances were an inevitable outcome of bringing these actors together and reminiscing on the height of their fame as young stars – and I’m not above it. Yes, Matt LeBlanc has doubled in size and Courtney Cox’s face looked like Lady Cassandra from Doctor Who (‘Moisturise me!’). But let’s move past the obvious.

The special was one of two halves. On the one hand, it felt artificial and at times, embarrassing. Random and brief celebrity guest appearances ranging from Justin Bieber to Malala Yousafzai felt like cheap attempts to bring the sitcom into the world of Gen Z, which is unnecessary. My generation already knows Friends well and has applied contemporary discourse to its problematic jokes and storylines (see: Monica’s fatsuit and Chandler’s transgender dad). Thanks to Netflix, we can watch it at any time and we don’t need Justin Bieber of all people to endorse its cultural influence.

On the other hand, the special was most successful in its simplistic and nostalgic moments. What the fans really wanted to see was the cast interacting with the old sets, their memories of filming and the funny bloopers. The table readings of iconic scenes were a nice touch and proved that the comedic dynamic between these actors is still as present as ever. Alongside this, the interviews with the sitcom’s creators emphasised that the most successful episodes were those performed on one set with a simplistic script that let the actors' comedic talents shine through above anything else.

Throughout the special, the simplicity of the show and its resultant triumph with audiences was emphasised repeatedly. But then this easiness was spoiled by continuous cuts to James Corden’s intolerable hosting and even more cringy celebrity appearances. The reunion should’ve taken a leaf out of the sitcom’s book and pared back the artifice to just let the cast genuinely enjoy themselves. In trying to drive home the show’s prestige, they went overboard and consequently produced a largely strained television special that is the antithesis of Friends at its best.

It was made clear that there won’t be another special or film made bringing the actors or their characters together, which is most definitely a good thing. I can now go back to rewatching my favourite Friends episodes in peace, undisturbed by James Corden. 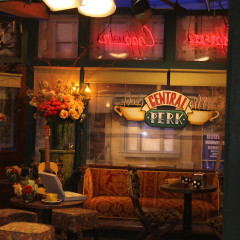 This HBO Max special saw the cast of the hit sitcom Friends reunite on camera for the first time in over 15 years. Was it worth the hype?