Theatregoers knowledgeable about the historic ‘work-in’ at Upper Clyde Shipbuilders in Glasgow in 1971 rejoice! Or, for people like me who know little to nothing about such a momentous event in the history of British worker’s rights, also rejoice! For Townsend Theatre Productions and writer Neil Gore’s play Yes! Yes! UCS! strikes (pun intended) the perfect balance between educating and entertaining its audience.

The production follows the story of two women workers involved in the industry of shipbuilding, which was under threat from the Tory government (what’s new?) in the early 1970s. The profession of shipbuilding and the format of musicals may initially seem at odds with each other. Still, the pure talent of actresses Heather Gourdie and Janie Thompson in being multiinstrumentalists and beautiful singers serves to soften the otherwise hard-hitting topic of the show. This is also achieved through their excellent comedic chemistry and engagement with the audience, as they pulled us in with their cheeky grins and delivery of inspiring lines.

Gourdie and Thompson’s committed performances were bolstered by the clever stage design and prop usage, with only a few adjustable backdrops, wooden crates and projected artworks conjuring up the immense scale of a shipyard on such a small stage. Not only that, but the audience is transported with the workers across 1970s Glasgow, London and Liverpool, validating the imaginative possibilities of small-scale theatre productions.

‘Work-ins’, protests and community solidarity are at the core of this musical, and it is impossible for the audience not to be roused by these real-life injustices faced by thousands of skilled workers. As playwright Neil Gore writes, the show aims to ‘share all these often hidden histories with as many people as possible across the country to keep their significant achievements and sacrifices in the public consciousness”. Sadly, workers’ rights remain a prevalent issue in this country fifty years on from the UCS work-in, proving that social progress is a slow but worthwhile endeavour.

Whether you just enjoy the magic of the theatre or want to learn more about working-class history, Yes! Yes! UCS! is worth your time.

You can find tickets and tour dates here. 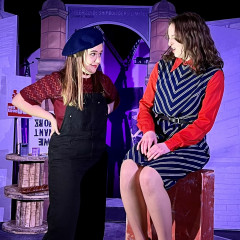