Christmas pantos. A staple of British childhoods at Christmas time, incomplete without a C-list celebrity in the starring role and a butchered interpretation of a classic fairytale. These are precisely the key elements that It’s Behind You!, by Medium Rare Productions, utilises for its spin on an adult themed festive pantomime.

The doorman at the Old Red Lion Theatre informed me that earlier in the show’s run, a family had turned up with their eight-year-old children to enjoy the theatrical festivities but were swiftly turned away to protect the children’s innocence. Good thing they were, as It’s Behind You! immediately kicks off with lewd jokes and swearing, followed by a sex doll dressed up as Snow White.

The show rightfully maintains all of the basics of a pantomime, with audience participation and garish costuming, but with a horror-comedy twist, with the panto cast getting knocked off one by one. The easily scared theatregoer needn’t fear, for the horror is still fully grounded in comedy, and the most that happens is that the stage lights turn off.

What is most brilliant is the play’s commentary on the British acting industry. The performer;s commitment and comedic timing are applaudable. The audience gets to revel in a failed children’s entertainer turned drug addict, a legend of Shakespearean theatre looking for his next acting challenge in the form of a cow, and a Joanna Lumley-esque crone.

Depending on the age of the individual audience member, the references to some British personalities will either land or be unfamiliar - the ideal spectator for It’s Behind You! would probably be someone middle-aged with an in-depth knowledge of British personalities from the 1960s onwards. There is only one nod to a younger audience in the form of a Taylor Swift song, but even despite my ignorance, the production was still hilarious to watch. Kudos to the small cast of Alice Marshall, Ben Lydon and Jack Robertson for seamlessly switching between various characters and costumes and keeping the audience laughing with their sharp writing.

It’s Behind You! is a testament to British culture and humour. Just remember not to bring any children along! 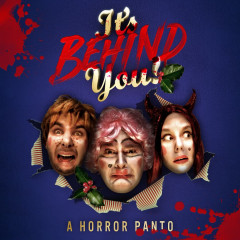 'It's Behind You!' Pantomime review