After years of male-fronted films, Marvel studios have finally given us the highly anticipated Captain Marvel, a fierce, fun intergalactic adventure about Carol Danvers - named ‘Vers’ for the first half of the film -  a proud ‘Kree’ (alien) warrior struggling to piece together fragmented memories of her past, all whilst fighting the shape-shifting ‘Skrulls’ who have infiltrated Earth.

In 2017 DC studios released Wonder Woman, their first female-lead film, followed by Marvel’s Black Panther in 2018 (highly praised for its ethnic representation), marking a shift towards more diverse mainstream movies. But despite the improvements in film diversity since 2017, I had the same fear going into the cinema as I did going to see Patty Jenkins’ Wonder Woman: that this had to be good. That is because it is so important to represent all genders, sexualities and ethnicities in high-profile franchises as it allows all children to see themselves on the screen in a positive light. An example is the positive effect that can be seen in the aftermath of Black Panther’s release. There are few female superhero movies, so when they do get made there is extra pressure on them to be good to prove that it is worth making more - hence my trepidation.

Not only is Captain Marvel a socially important character, being a figure young girls can look up to, but it is also a thoroughly enjoyable and fun film, nodding to the rest of the Marvel cinematic universe whilst maintaining its independence. The script was witty and allowed itself to be a little cheesy, acknowledging that yes, superhero movies are a bit ridiculous - but it was still sentimentally indulgent enough to be emotionally engaging, a tough but valuable balance in films with such wide demographics.

Brie Larson gave a charismatic performance and bounced off Samuel L Jackson well, bringing a warmth to Marvel’s trademark humour that would otherwise have been sorely missed.

Although some elements of Carol’s backstory seemed to be rushed, the films fast pace was otherwise effective and absorbing, and there was little else I could fault with it. Often, action films such as this lose my interest by introducing too many plot lines too soon, but keeping things fairly simple left plenty of room for character development and visually impressive fight scenes, both of which are what I enjoy most about superhero movies.

As many people will know, the last installment of Marvel’s Avengers series is due soon, and it is no secret that a new set of heroes are about to suit up to fill their place. I certainly hope to find Captain Marvel there in the hands of directors Anna Boden and Ryan Flack, as it is clear that Carol Danvers has so much more to offer, and I am very, very excited to see it. 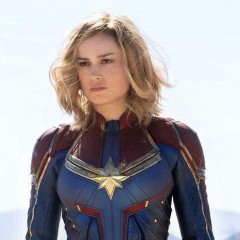