A story of love, loss and Julie Andrews.

When I read the description of this show, I was excited to see it. It sounded like an interesting story about growing up and how different people in your life can influence you. I was quite underwhelmed with the result.

The venue was tiny, so the actress barely had any space to move, and in my opinion, she could have put the show on just as well without the furniture and props, allowing her more space to move around instead.

My main problem with the use of the space was the lighting. The venue seemed to be lit by two standard lights with a shade, similar to that that you may find in a bedroom. Unfortunately, the angle the lights were at and the space her furniture took up meant that the further stage right she moved, for example every time she went to sit on or stand behind the chair, she was no longer lit and was often thrown into total darkness. This somewhat ruined the tone of a quite serious and potentially emotional show.

The saving grace of this show, in my opinion, was hearing little snippets of Julie Andrews. I was surprised at first when a clip of ‘Do Re Mi’ was played and the actress didn’t sing it. However, as the show progressed, she would sing with the sound clips, and by the end she was singing some bits without the actual song as a backing. Unfortunately, Julie Andrews has a very beautiful and quite distinctive voice, so most people singing alongside her will pale in comparison, and this was no exception.

Perhaps it was the difference in cultural upbringing or our age, but I failed to really identify with the show. In particular I didn’t understand at times how Julie Andrews linked in. I genuinely think this story is very interesting, but I often found myself wondering when the show would end.

Overall, this has the potential to be a rather intriguing and moving piece, which instead felt overworked and overcrowded, especially with the props and furniture involved. I admire what this piece was trying to do, but I can’t say I enjoyed it as I was hoping I would.

Being Julie Andrews is on at 17:00 on Saturday 5th May and at 12:30 on Sunday 6th May at Junkyard Dogs. For more information, click here. 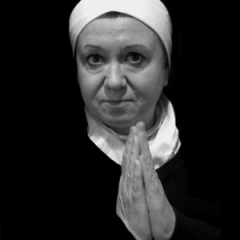 A story of love, loss and Julie Andrews.