One of this year's big Grammy nominees is a pitch-perfect tribute to early 1990s Rhythm and Blues.

We all anticipated the release of Bruno Mars’ third studio album, 24K Magic (produced by Shampoo Press & Curl), after its five-year-old predecessor, Unorthodox Jukebox (2012). The 2018 Grammy nominee for Album of the Year and Best R&B Album is an incredible admixture of funk and contemporary rhythm and blues. Since his first debut studio album, Doo-Wops & Hooligans (2010), his music has become increasingly energetic, sampling the classic styles and grooves from diverse 70s hip-hop and 90s R&B.

His songs essentially resemble the exuberant and soulful sounds of Kenneth "Babyface" Edmonds, Jimmy Jam and James Brown. In turn, 24K Magic (2016) is a clear emulation of the smooth rhythm and blues Mars grew up with. The composition of songs like "Versace on the Floor" convey the silky beat and fervent emotion he highly regarded from his hero, Babyface.

I feel as many “hooligans” do, that Bruno Mars has created an album of strong passion and 90s nostalgia. He has derived his style from a new movement that is, while old-school, exceedingly relevant and passionate. It is experimental and diverse and, ultimately, Mars’ affection for R&B is indisputable. We recognise his energy in his artful songwriting and even more so in his performances.

Notably, the American singer-songwriter has sought inspiration from some of the most timeless musicians of his era. It is because of this that his music, since his emergence, has surpassed expectation with a series of nine classic electro-funk comebacks.

In this studio album, we can embrace his irresistible dance-inducing pop compilations (the chart-topping "24K Magic" and my personal favourite, “That’s What I Like”), sweet grooves and slow rhythmic jams (The James Brown-inspired "Perm" and "Versace on the Floor"). Nominated for Song of the Year, “That’s What I Like” had a highly positive commercial response for its immersive music video and swing-beat vibes. It’s impossible not to react to the song’s positive spirit. Mars searches for a deeper groove and buoyancy in this song and it is also met with his remarkable voice.

We can appreciate Mars’ amazing vocal delivery and lovable charisma as he ends an album of high spirit and bounce with a power ballad, "Too Good to Say Goodbye".  The closing ballad, co-written by R&B icon and virtuoso, Babyface, is beautifully sentimental, vulnerable and passionate, mirroring 2012 hit “When I Was Your Man’s” place on Unorthodox Jukebox. He claims his love after a break-up, confirming themes of loss, regret and longing. It’s an intimate song, one contrasting the more dynamic funk-based tunes that dominate 24K Magic. It is expertly delivered and beautifully stands out from the rhythmic “That’s What I Like”.

While both “Too Good to Say Goodbye” and “When I Was Your Man” are arguably more wistful, I equally love the comfortably slow jam, “Versace On The Floor”. I love how it is reminiscent of the 80s, easily influenced by Michael Jackson’s early sounds, simultaneously slow and upbeat.

My only critique is the record’s short runtime. We are merely met with nine songs and no subsequent deluxe edition with extra tracks. In spite of this, the album’s brevity is enlivening; Mars has managed to outdo his multi-platinum predecessors with ease. Instead of yielding to classic chart-loving pop music (in his earlier tracks like 2010’s "Billionaire"), he has crafted something refreshing and inspiring.

By distancing himself from the undeniably tuneful popular music he was once familiar with, he has proven himself as an exciting R&B singer-songwriter. The standard of his work is superior to so many of the overrated mainstream pop singers of this generation.

Few contemporary pop artists acknowledge the music styles founded in the 70s and 90s. Few can respect the context of the tracks they ‘sample’ from. With Mars, we can get acquainted with some of the most acclaimed R&B presences. It is an album of praiseworthy déjà vu - a musical throwback. 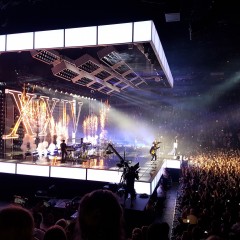 One of this year's big Grammy nominees is a pitch-perfect tribute to early 1990s Rhythm and Blues.