A story of old America bantering with the present day.

You might have to serve your time toiling away for tickets, but it is definitely worth it. Hamilton surpasses the hype with a story plainly more diverse, original and telling than other West End breakthroughs. Some months ago when I was blessed enough to see it, I witnessed the street music of a most diverse cast seize the stage, an experience that has not possessed the live theatrical sphere enough. The rags-to-riches American musical closed with the animation of a Greek Tragedy. The hero’s ambition was the catalyst to his rise and fall.

The penniless bastard-orphan from the Caribbean, Alexander Hamilton, was not noble by definition. But from ten-dollar foundling immigrant to founding father, he rose to an unlikely authority as Washington's right-hand man and the first Secretary of the American Treasury. The calculating waiting-man, Burr (Sifiso Mazibuko), and brazen opportunist, Hamilton (Ash Hunter), were quick foils. Where one man forever ‘waits’ before taking any political stance, the other is too resolute and rash as if he’s ‘running out of time’. Their attitudes disagree but they share an intent on power. The climactic standoff between them in the song, ‘The World Was Wide Enough’, pictures two guns poised. We know their dispute cannot die, someone must shoot as they stand at opposite ends of the clock, the turntable circling like a potent fast-forward of fate. The tireless synthesiser and countdown of the clock hesitate for a beat as an ensemble actor seizes Burr’s bullet. Time takes a breath to cue Hamilton’s soliloquy and the bullet nears him leisurely.

Hamilton was very much a story in song. Where at times the music was hushed and lyrical (the grand vocals of Rachelle Ann Go as Eliza performing ‘Burn’), it was later met with excitable energy and humour (sharp-witted stand-out Michael Jibson AKA King George). What stood out was the show’s rare amalgam of hip-hop, poetic wordplay and R&B. There was a neat interweaving of agile rap, the beats of dancehall and the uptempo style of spoken word. Spoken words are sensitive things - if done well, every word has something profound to carry. So, Lin-Manuel can definitely pride himself on his writerly detail and flair.

The jazz-infused ‘What’d I Miss’, for one, was amazing. The staccato rhythms churned out by Jason Pennycooke gave way to something certainly very heated in the cabinet battles against Ash Hunter’s Hamilton. The issue on the table was Hamilton’s plan to assume state debt and establish a national bank, an ‘insane audacious’ plan, perhaps, but quite momentous. There is a stark realism in putting a political debate in the visceral world of a hostile rap battle. Audience members became part-actors, siding with their plans, and it was natural for us to lean toward the witty eloquence of our brave-or-decidedly-reckless protagonist.

The props had an agency of their own on the stage like fluid narrative instruments embedded in the musical’s theatrical world. In ‘Non-stop’, domestic furniture - a chair or table - were as much a part of the play’s emblematic vocabulary as the characters. It was most prominent in ‘Yorktown (The World Turned Upside Down)’ - a scene that captured the Battle of Yorktown, the final and pivotal battle of the Revolutionary War. Pieces of furniture were upturned by the ensemble in a blur of gunplay. An interplay of red and blue flooded the stage as the world of theatre splintered into our own reality. The pressures of history enveloped the present at this moment. The props were not abstract background pieces to be overlooked. They lept and pivoted on stage on turntables; they were temporal devices that announced the passage and transience of time. It was as if the props had devised a countdown on Hamilton’s life. Death lingered like a shadow to Hamilton, not a remote fate but an unswerving presence. The stage was plastic, malleable, and the props were signs of external conflict - or death - bitterly interfering with the domestic. 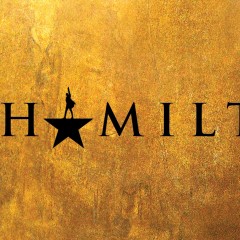 A story of old America bantering with the present day.