A production as effortlessly performed as it was written.

William Shakespeare’s Othello at the Globe was chilling and beautiful. It’s the story of a valiant black Moor whose unearthly passion for his innocent wife Desdemona stirs into a hard resentment. Their relationship is compromised when low-ranking officer Iago underhandedly stage-manages appearances to nurse a torrential bitterness in Othello. It is a play about seeing and imagining, sight and myopia. It is about the polar universal passions, choleric jealousy and desire. These passions are theatrical, detrimental and inconstant and the two forms of temperance are linked inextricably with Othello and his foil, Iago.

At the Globe, there was an uneasy negotiation between improvised comedy and tragedy. Fair warrior and tragic hero Othello is greeted by the audience with ambivalence. André Holland delivered a matchless complexity to the character. Jealousy was his persecutor, self-doubt a nemesis and misunderstanding a catalyst to self-ruin. I saw in Holland’s performance an impulsive escalation of language to action. By his hand, Desdemona falls and he also. Death provokes further death in this unforgiving tragedy.

For white Desdemona and black Othello, their passions are condemned as a ‘bestial’ animal joy and it doesn't take long for their innocent love to be foiled. We have characters like pragmatist Emilia, wife of Iago, who pleas for women to be autonomous in a Venetian society concerned with female regulation. Sheila Atim as Emilia was boldly articulate in contrast to Desdemona, who later becomes a caricature of the passive wife ideal. But, Othello wasn’t a play solely concerned with chauvinism, rash masculinity or misogyny. It was about truth, deception and reputation.

The characters’ high emotion were goaded by the animated stage dancing and heated fights, the drunken episode with Cassio, the stunningly lyrical “The Willow Song” and the charming costumes designed by artful designer Jonathan Fensom.

We all admired Mark Rylance as the sharp villain Iago who paraded his outlandish self on stage like a renaissance court jester. Rylance was masterful and cunning as the malcontent. He played Iago as motiveless and resentful; he was in a position as inconstant and sinuous as his shift between mock innocence and frank deception. He is a man of vice but his witty gestures to the audience made us conspirators in his machinations. Director Claire van Kampen made the globe a narrative instrument aware of its unreality. But, the play’s meta-theatricality did not impede on its realism. It was all the more human. Spectators become part-actors and the air was thick with Iago’s dramatically ironic guise of honour. We did not want to condone his vices, however, his scheming was so brazen and his wit too apt. He was a likeable Machiavellian, quick with his snidely amusing soliloquies. He was typecast as the “honest Iago” by all and the irony was exquisite. Rylance makes him a divided character, a foil to himself, even.

Virtue was central to the character of Othello and his lieutenant Cassio but all it took was a deft tug at their guileless heartstrings for their roles to be recast. Foolish stock character Roderigo is also deceived and his sheer lack of good sense and susceptibility to double-dealing is hysterical. Othello at the Globe became a play that proceeds from miscommunication and revolt.

The Globe as a setting was most fitting. Characters disrupted the fourth wall with an authentic direct address and flair that would have humbled many actors into an awed silence. To say the acting was merely good would trivialise the production’s worth. Truly, it was faultless, an innovative transcendent experience that merits the show as one of the greatest Shakespearean productions in recent decades. 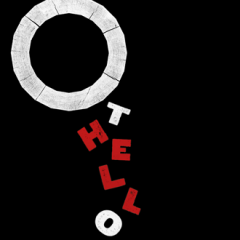 A production as effortlessly performed as it was written.