Khameleon Productions’ modern adaptation of Euripides’ tragedy was stunning. The timeless narrative of Medea addresses the loss of identity, the concept of ‘otherness’ and one’s plaguing desire for mercy. These universal concerns were explored by a diverse all-BAME cast and crew at Oxford’s Keble O’Reilly Theatre. In the context of ancient Greek drama where it was inconsequential for women to be represented by men for men, Medea takes a stand. Where women are to be seen and not heard, Medea is the stunning ‘other’. She is the protofeminist in a dire setting of patriarchy. She is a woman beset with tragedy in a period where women who were desirable and women who were undesirable seemed to be the only distinction.

Charithra Chandran captured the artful wiles of Medea flawlessly. After the Greek mythological ‘hero’ Jason abandons his wife and two sons in pursuit of a prosperous marriage with the princess of the land, Medea is allowed one day before she is cast out. Chandran was unnerving in her disturbing quest for justice and revenge but she begins with a legitimate cause that we cannot assume is unjust. Her Machiavellian tactics are a reaction to an anti-feminist society that condemns her as inferior.

MEDEA:
Of all creatures that breathe and think, we women are the most unfortunate…

Chandran’s soliloquies were delivered matchlessly. Medea exploits male vanity by plotting murderous plans against her own sons and the princess. Chandran portrayed a manifestly intelligent woman who, although not in her right mind, is fit to plead her case in a system determined to ‘subdue’ her. Her bestial gestures and movements appeared genuine and her voice quivered with a feverish lust for vengeance. Above all, her performance stood out for her ability to incite both pathos and fear. Her title as barbarian had to be overlooked for one more fitting. She made Medea formidable.

Joe Stanley’s fair portrayal of Jason was a great foil to Medea. The tension between them was nothing short of arresting, yet it was Chandran’s performance that stood out for its complexity and passion. Her ability to meander between depression, fury, panic and resolve was in one word, inspiring.

Director Francesca Amewudah-Rivers was able to make a fascinating inquiry into the psyche of society’s most marginalised through a goosebump-inducing chorus. There was a beautiful interweaving of spoken word, intimate poetry and music that complemented Medea’s threat of isolation. The stage was small and I was glad for it. It provided an intimate atmosphere where music and poetry could cross-cut fluidly. The stage boasted menacingly dark lighting. The chorus singers and central characters were also adorned in black to suit the naturalistic stage backdrop of obscure birch trees and a wooden cage. The physical cage, to me, was a symbol of Medea’s mental isolation. It was the embodiment of a caged and luckless woman.

Meanwhile, the all-female chorus echoed Medea’s subconscious. They were both attracting forces in a riveting magnetic field of soul, gospel and drums. I was moved to tears by the genius of the spoken word artists. I have to also applaud the chorus, Anushka Shah, Olivia Moinuddin, Fis Noibi, Tumi Olufawo, Madhulika Murali, Shekinah Opara and the stunning solo from Rore Disun-Odebode.

I truthfully had no disappointments. I would have been quite content to watch it another two or twenty times. Francesca’s collaboration of music and the dramatic deliveries of our chief actors and actresses was so heart-tugging. The tragic classic will not be lost to this generation. 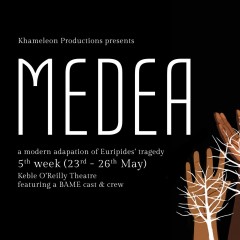