I went to see Everybody's Talking About Jamie on February 14th at the Crucible in Sheffield. It was quite a while ago but this review is still relevant because it has now gone to the West End!

I really enjoyed ETAJ because it is fun and new. I live near Sheffield, which is where it's set, so it felt very familiar. Lots of musicals are set at least 30 years ago, so they are great to watch but not exactly relevant. Jamie is modern and, for me, local which made it all the more lovable. There was a very spontaneous standing ovation at the end... quite rare!

Jamie is an openly gay 16 year old boy who is coming to the end of Y11. His class are all talking about what jobs they want to have. Jamie's dream is to have his own drag act and become a drag queen! The show is partially about him overcoming obstacles to become who he wants to be, but also about his connection with his mum. I loved watching how special their relationship clearly was.

Jamie is based on a true story. There was a documentary made, which inspired the director to make the musical. By complete chance, the real Jamie (in full drag!) sat behind us when we went to see it.

The songs are all really catchy, and the actors' singing is amazing, especially the mum, Jamie and his best friend Pritti. The set is clever, with desks that are pushed around to create runways, classrooms, walls... etc, and folding scenery to make different places. The costumes are very effective, my favourite being a white dress that turns red!

All in all, Everybody's Talking About Jamie is a coming-of-age story with a twist, that shows the importance of being yourself and following your dreams. I am so so pleased it made it to the West End, it really deserves it. I would recommend everyone to go and see it and keep talking about Jamie! 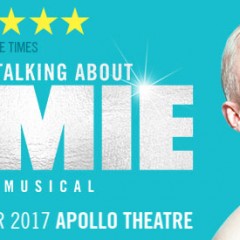 I went to see Everybody's Talking About Jamie on February 14th at the Crucible in Sheffield. It was quite a while ago but this review is still relevant because it has now gone to the West End!