I saw Our Country’s Good, directed by Fiona Buffini, on press night at the Crucible in Sheffield. I really enjoyed the experience of seeing such a wide range of people on stage.

Our Country’s Good is part of the Ramps On the Moon project, a project that is trying to increase accessibility in the theatre for D/deaf and disabled people. This is their third production, and all performances are BSL integrated, captioned and audio-described. I am looking at integrated theatre for the research part of my Arts Award Silver, so it was really interesting to experience a show like this, where about 60% of the cast were D/deaf or disabled. There were entirely deaf actors who signed, speaking actors who also interpreted their words using BSL, hearing impaired actors who spoke and signed, physically disabled actors, able-bodied actors who signed and those who did not.  It felt like a really diverse, well cast group of people, and it was great to see a diverse audience watching the show too.

I enjoyed watching the signing happen on stage, and the director Fiona Buffini had played with different techniques in different scenes, which suited the actors on stage but also made the experience exciting for the audience. When I interviewed Fiona for my Arts Research, she told me how hard it is to get the signers in a place where the audience can see them, but also so the D/deaf actors can follow along with what's going on. Serious respect!

If I’m honest, I wasn’t blown away by the play itself. I was left with a feeling of dissatisfaction, and a feeling that the characters hadn't got very far. Thinking about that though, I wonder if Timberlake Wertenbaker deliberately meant for those feelings to happen. These convicts are stuck on the huge island of Australia, half a world away from home. They weren't going anywhere. The play shows how, when these 'criminals' are given the chance to act in a play (directed by their Second Lieutenant Ralph Clarke (Tim Pratchett)), their confidence grows, and they begin to learn skills like teamwork and respect for one another. It is about inclusion and acceptance, and when there are disabled and D/deaf people on stage, that message is even more prominent.

I wonder if the amount of things going on at once also hindered my intake of the story - there was the caption board, the signing actors, and the speaking actors to look at. I felt like I didn't have much of a connection with many of the characters - I couldn't really relate to the officers, they didn't feel very human (again probably deliberate!).

I did really enjoy several performances though. Possibly my favourite character was John Wisehammer (Tom Dawze), a convict who loves words. He felt very earnest and I thought the BSL really added to his character and performance. I also enjoyed watching Mary Brenham (Sapphire Joy), as she felt very authentic and Mary is a very lovely character. I thought Liz Morden (Gbemisola Ikumelo) was also well played and I think Gbemisola captured her fierce spirit brilliantly. I could go on… the cast were all very good, and suited their roles.

Music was used well throughout to introduce the atmosphere of each scene. I liked being able to look at the caption board to see how it was being described! Light was also nicely used, with different lighted backdrops showing different times of day - an ombre of colours for daylight, and a dark background with a lit moon and stars for night.

The stage was made up of wooden planks, giving the picture of a ship, but also a newly built building. There was sand on the floor, which set the scene in Australia clearly. In the first few scenes, more planks were added, giving the idea of the slowly growing colony. Certain scenes used a piece of cloth that mimicked a sail, to create a different environment. The play had clearly been blocked for a proscenium arch (front-on stage) theatre, rather than the Crucible's thrust stage (audience watching from three sides of the stage). This meant that, because I was sat on the right, some scenes were very hard to see. Given that the director knew the theatres the show would be touring to, that was quite disappointing.

All in all, I really enjoyed the play as an experience. I thought it was well acted and directed, but there was a slight lack in clarity and quality at times. I wouldn't recommend it to children, as the story is quite hard to understand at times and there are the occasional sexual moments(!), but I would recommend it to anyone else, and what's great is it's accessible to anyone who wants to see it! 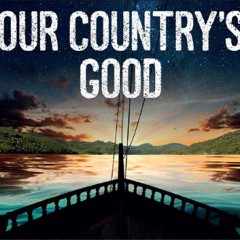 I saw Our Country’s Good, directed by Fiona Buffini, on press night at the Crucible in Sheffield. I really enjoyed the experience of seeing such a wide range of people on stage.