A super enjoyable, wacky musical for all ages, at the Crucible in Sheffield. I saw it on press night, 6th December. It is on until January 20th 2018.

Click here to watch a short film of clips from the performance.

I totally loved the Wizard of Oz. It stays loyal to the 1939 film adaptation that so many people know, but director Robert Hastie and designer Janet Bird have definitely made it their own. The Crucible stage is thrust (seen from three sides) and I'm sure it provided some challenges... The Wizard of Oz is full of magical happenings that are easy to create in film, but on a live stage are much more difficult to make happen. Huge congratulations are due to all the brilliant minds that went in to overcoming those problems - the set, scene changes and magic were all seemingly effortless and absolutely incredible to watch.

One of my favourite design choices is the change between Kansas and Oz. I won't give too much away, but the moving stage was brilliant. I was totally in awe with how under-lit bricks could create a yellow brick road, an evil lair, the city of Oz and more! In a thrust show, backdrops are often pretty impossible, so the scene is set through other means - props, costume, and of course the acting! The transition scene between the two worlds (the tornado scene) was also really nicely done, with the chorus moving pieces of fence and the farm, along with fitting music and sound effects. The Wicked Witch even made an appearance!

All of the performances are fab in this show. My favourites have to be Dorothy's three companions - brainless Scarecrow (Andrew Langtree), heartless Tin Man (Max Parker) and scaredy-cat Lion (Jonathan Broadbent). They play Dorothy's (Gabrielle Brooks) friends so lovingly and with much talent. Dorothy herself is very well played too, capturing her innocence but also her resilience and determination perfectly. Her version of Somewhere Over The Rainbow is simple but lovely.

One performer deserves a special mention. Toto is a live dog in Kansas (cute!) and a puppet in Oz. Rhiannon Wallace is the puppeteer behind Oz-Toto, and my goodness, her performance is absolutely stunning. The way Toto's emotions are always portrayed on her face as well as in the puppet's body language is mesmerising. Often I found myself getting a little distracted from the action and just watching how every ounce of her attention was focused through her puppet, always gently wagging Toto's tail.

I was a little doubtful about the chorus in Kansas... they did lots of sitting down(!), but they really came to life in Oz. All amazing dancers and performers, they really brought the show together. I fell in love with the Tin Man's song and how they used basic pots and pans to create the clunky, rusty noises of his metal body. It was wonderfully done. Another song and dance I enjoyed was the Jitterbug. The costumes, set, song, music and dancing were awesome. The use of glow-in-the-dark pieces really added suspense and pizzazz!! Also the style of dance, jazzy with lots of tap, really matched the music.

I think one of the things that made this show so special was the details. White hats to cover the poppies' heads with snow; dark boring colours in Kansas, bright warm colours in Oz; a basket that's a cage but also a hot air balloon basket etc. Every second of it had been thought about. The Munchkins were super cute and talented and their costumes were very well designed, with pompoms galore!

All in all, this show is a heart-warming, inventive, colourful, well made production for all ages. I would recommend it to anyone who likes the film and likes musicals.

Showing at the Crucible in Sheffield until 20th January 2018. 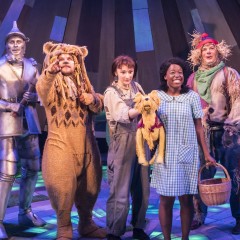 The Wizard of Oz

A super enjoyable, wacky musical for all ages, at the Crucible in Sheffield. I saw it on press night, 6th December. It is on until January 20th 2018.

Click here to watch a short film of clips from the performance.