Wonder was originally a book, but has recently been adapted to film. I saw the film at the Odeon cinema in Sheffield on the 16th of December 2017.

I first read Wonder (by R J Palacio) a couple of years ago and I loved it. I was excited when I heard that it was being made into a film (directed by Stephen Chbosky), so I reread the book, to remind myself of the story. I enjoyed the movie, but not quite as much as the book (although I'm generally a book person, so don't read into that!).

One of the things I loved about the book is the different narrative points of view. R.J. Palacio writes the book from numerous perspectives: Auggie, his friends, his sister, his sister's friends... It brings insight into the story. It really encourages you to think about the impact you might have on other people and that everyone is working through their own problems. I think these are extremely valid lessons for everyone to learn. In the film, they kept this quality, which is more unusual in film. I think it works well, and is pretty essential to the plot. My only bone to pick, is that it felt like the changes in characters petered out towards the end. From about two thirds of the way through, Auggie was the only narrator.  I understand that this probably made the story flow more, but it just felt inconsistent.

I was most impressed, acting wise, with Auggie (Jacob Tremblay), Jack (Noah Jupe), Via (Izabela Vidovic) and Summer (Millie Davis) along with all of the other children. Owen Wilson and Julia Roberts are also great as Auggie's parents. To have such a high percentage of the cast as children obviously runs the risk of having some dodgy acting, but I thought the standard of performance was very high.

I really liked the film. All in all, it's a great, family-focused movie about choosing to be kind. It teaches great lessons and, as it is family friendly, I hope those messages will reach younger children. 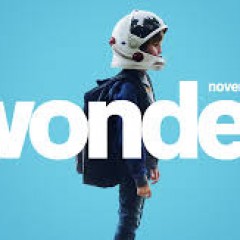 Wonder was originally a book, but has recently been adapted to film. I saw the film at the Odeon cinema in Sheffield on the 16th of December 2017.