On a sunny Manchester evening, over 200 people gathered into the Bridgewater Hall car park to celebrate the ending of 18 amazing days of the Manchester International Festival 2017.

At six o'clock, the audience was greeted by Maxine Peake. Peake tells us the story of Friedrich Engels, who came to Manchester in 1842 from the Ukraine. She talked of his relationship with the working class and his work alongside Karl Marx. Peake made us think by questioning how much has Manchester changed? She joked that maybe the Victorians had it better - at least they had bonnets.

Peake then began the countdown to the film. However, after a couple of seconds, the film was interrupted again by a live feed of another woman presenter stood on a balcony opposite us.

She played with the audience by pretending that she did not realise she had gone live and begins drinking cider. This was clearly an act and got a couple of giggles from the audience but overall just seemed bizarre.

She then informed us more about the history of Friedrich Engels, including his work in Manchester, his love life and his book. She exclaims, "Engels. Capitalism boss by day and partying communist by night".

Another presenter live in Engels Exchange, outside HOME. Here, my friend and I get tapped on the shoulder by a MIF volunteer and are handed a piece of paper saying 'follow me?'

With a group of people all looking confused and asking each other if they got asked to follow, we head over to HOME where we are told we are going to be entering Engels Exchange while being filmed.

We reach Engels Exchange, where a number of different stalls from 'How to Shoplift to Wax My Bax'. On first impression, it felt very mismatched. I joined the stall called 'Learning from a Migrant', where I was told a very personal and heroic story from a Syrian migrant.

But, on either side of me, I had people making signs with spray paints and people making glitter beards. Due to the fact everything was outside I lost parts of what was being said and just felt this need to be inside with an intimate audience and not just thrown in with all these random other stalls.

Engels Exchange was clearly to be all inclusive, exciting, yet highlight the issues that hit Manchester today and the close the relationship between Engels' time and now.

Then, at 19:30, the audience gathered round Engels' statue to have smoke go up, balloons and flags fall, and a song that sang "Communism's coming home".

It seemed that the amazing journey that was taken by this statue was overshadowed by the television aspect to this ceremony. Half the audience missed the screening of the film due to being gathered in Engels Exchange and for those lucky enough to see said it was random, informative but were expecting a grand unveiling of the statue not to just walk down and it be already up.

A very anti-climatic end to eighteen such great days. 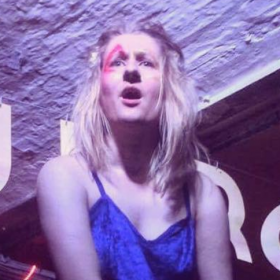 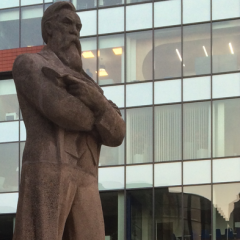 On a sunny Manchester evening, over 200 people gathered into the Bridgewater Hall car park to celebrate the ending of 18 amazing days of the Manchester International Festival 2017.