Anthropologist at the London School of Economics and Political Science, Dr. Jason Hickel forces eyes open and breaks down the facts about economic inequality around the world with his new book, The Divide: A Brief Guide to Global Inequality and its Solutions.

First, a question: why are some areas so rich and others so poor? Some technologists think new fangled technology or more accessible technology will fix it, but they're wrong, Hickel explains. It's all about the distribution of power and resources and only therein can lay the resolution.

Born in Swaziland, Hickel has made his career in ethnographic studies of sub-Saharan Africa and the global south. With his work, he asks why inequality is getting worse. He reminded us that the richest eight people now control the same amount of wealth as the poorest half of the world combined.

From The Divide he shares three stories pertaining to and illustrating the intense inequality in the world.

In the mid-19th century, during the height of the British Empire and the Industrial Revolution, droughts killed around 10 million Indians within three years.

British power rose before the end of the Industrial Revolution and India's economic make up was obliterated. Towards the end of the 19th century, droughts took another 20 million Indian lives directly as a result of the exploitation of Indian resources and labour. Colonial India was 'de-developed' and the economic loss was huge.

Next, he told us about Chile while Nixon was President of the US. Chile's President was Allende, a liberal who believed in the equal distribution of wealth, social welfare, better wages and healthcare. Allende's Government nationalised the copper mines and capped land ownership at 80 hectares and recompensed all landowners who lost money and land from this policy. US corporations had heavy investments in Chile and simply being recompensed was not enough for the neo-liberal Government.

It took non-violent steps to strangle Chile so as not to spread this kind of thinking, affecting the US' economic interests. Nixon put pressure on the Chilean economy by instructing the then Director of the CIA to "make the economy scream." Finally, a coup was initiated and in the name of support for the junta, the US assassinated Allende, and Chile took decades to recover from the ensuing deterioration.

Finally, Typhoon Haiyan hit the Philippines in 2013. It killed at least 6,300 people and caused over $2 billion worth of damage. The most expensive Filipino typhoons have happened since 2008. As Haiyan struck his motherland and even his hometown, the UN Climate Change delegate for the Philippines was speaking in at the Climate Change Conference in Poland.

Fighting back tears he explained his anger and confusion at the event. These events should not be called natural disasters as they are the result of global warming, caused by the "inequity and the pursuit of so-called economic development that dominates the world." The arbiters of this 'development' are really the big Western powers – leaving countries like the Philippines to bear the brunt.

To finish he linked stories of global inequality to the rise of demagoguery fanning the flames of division by pandering to ignorance. To fight these figures is to solve the problems of inequality. A pensive and passionate talk by Hickel with his investment and eruditeness causing cogs to turn rapidly. 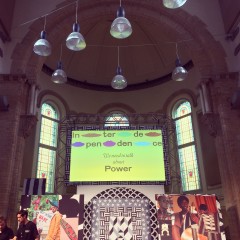 Interdependence: We Need to Talk About Power with Dr. Jason Hickel