From Random Acts Midlands, Dion Kitson has made a brilliant poem about the alluring yet worrying detritus of Dudley.

I've always loved art that explores environments filled with decay, so to see this film was very exciting. We see lots of beautiful images of ugly scenes. A lot of Dion Kitson's hometown of Dudley that we are shown is either falling apart architecture or examples of neglect of the landscape: abandoned buildings and a surprising amount of trolleys left to become part of the flora of alleyways. Dudley is shown to us in a micro and a macro way.

The striking usage of lines, texture, and symmetry exhibit the talented eye of the cameraperson and makes the most of the decay and shape and layout of the ageing walls and buildings. We don't see much of anything and yet the film is so busy. We get breathing space from wider shots of whole areas or shots composed to include a lot of the sky or a plain surface.

The decay is more than just physical, it is also more vague as 'to let' and 'for sale' signs and boarded up windows are indicative of Dudley's economic decay. Also highlighting the intention of this short – beside simply being a set of images of Dudley – is the voiceover delivered by Kitson, which is described as 'dismal' in the film's synopsis but I'd say it's pithy though understated and certainly without the pitfall of subtlety. The rhyme and fluidity of the voiceover works in tandem with the formal and shapely relationship between the images. It addresses the poverty and unemployment of Dudley, drugs and alcohol, anti social behaviour, Brexit, alongside sights of the abandonment, the smoking character, the amount of high-rise apartment blocks and Union Jacks and St. George's Crosses.

I enjoyed how plants and greenery, with all its connotations of optimism and life, were used to convey desolation and, again, abandonment. Almost as if to signify that the systems that constructed the town of Dudley as we know it have failed and it's time to renew, regrow, and reflect. A witty voiceover with an inexplicably sudden change in pitch makes this short something worth listening to as well as watching. Must something change about Dudley, or is this what makes Dudley Dudley? 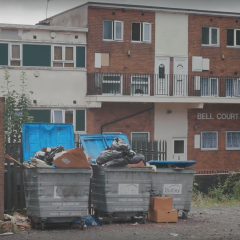 From Random Acts Midlands, Dion Kitson has made a brilliant poem about the alluring yet worrying detritus of Dudley.