Voice MagReviewsJess Glynne at the E…

Jess Glynne is currently travelling around the country on her latest arena tour, Take Me Home.

After what feels like years of waiting, I was finally lucky enough to see Jess Glynne live on Sunday 20 November at the Echo Arena in Liverpool. Going to see concerts at the Echo usually come with the guarantee of being a great night but the energy that Jess Glynne brought with her along with a room full of scousers was just overwhelming.

She was supported by an artist called RAYE, a London teenager who recently left the BRIT school. She just signed with Polydor earlier this year and released an EP last year. She performed her own songs such as I, U, Us, and her new song By Your Side, which she features on with Jonas Blue. Jess was also supported by Wretch 32, and if there wasn't already a buzz in the air as people waited for Jess Glynne, there definitely was when Wretch left the stage. He hand picked some of his old songs that he obviously knew would get the crowd jumping, from beginning to end he had everyone out of their seats and dancing. If thats not a great support act, then I don't know what is!

Jess sang songs from her album I Cry When I Laugh which debuted at number one on the UK Top 40 and reached number 25 on the US Billboard 200, where it spent 12 weeks in the charts. The album features the number one singles Rather Be, which won her a Grammy as a featured artist, My Love, Hold My Hand, Don't Be So Hard On Yourself and Not Letting Go, which she featured on with Tinie Tempah. From the moment she stepped onto that stage to the moment she walked off again, there was a constant energy and buzz that she brought. I can honestly say it was probably one of the best concerts I've ever been to. She worked covers into her own songs and made them her own, she came into the crowd and interacted with her fans and you could tell that she was genuinely grateful to her fans there with her.

Her voice is just out of this world. She just has talent coming out of her ears, the way she can hold notes and make it look like its as easy as breathing was just incredible. Whenever you go to a concert you always walk away with the buzz of adrenaline and wake up with post concert blues. Writing on the Tuesday after and I've still not recovered. I'm still in a constant awe of how amazing she actually is.

Jess is touring until the beginning of December so be sure to catch her if you can. You can also go onto her website and sign up for alerts when she's performing near you. I would strongly advise that you go and see her live if you have the chance and witness her magic for yourselves. 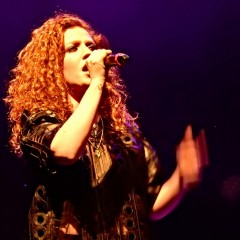 Jess Glynne is currently travelling around the country on her latest arena tour, Take Me Home.