This past month I have been lucky enough to see the touring cast of Legally Blonde twice, the first time in Liverpool (yay Liverpool) and the second time at their last venue the Palace Theatre in Manchester. I bought my tickets for Liverpool over a year before the actual show and wanted to avoid the songs so I could be pleasantly surprised. However, this plan did not work out well since one of my best friends did the musical as her end of year show and I am still yet to get the songs out of my head!

Both time I saw the show the cast was near enough the same, except for Elle Woods. The first Elle I saw was Rebecca Stenhouse, who I also saw as Margot. I have such an admiration for understudies and swings, who need to know their own stuff as well as the other character they could potentially be playing that night, they are the real MVP's. Rebecca smashed it as both Elle and Margot. I was happy I got to experience her as both parts!

Lucie Jones, was Elle I saw in Manchester. I was already excited to see Lucie on stage again, after seeing her in Rent but she literally blew my mind. Her comedic timing gave me life, her voice gave me chills and her love for the character and the show was hard to miss. Film Elle would be proud of Lucie as on stage Elle, and Rebecca!

Shout out to Laura Harrison, for being Northern! and also for being amazing in the show. It's hard to dislike Vivienne and be all 'Team Elle', when Vivienne was as cool as Laura, and her voice!!!!!!! This Legally Blonde cast can really really singgggg!

Helen Petrovna played Brooke, and if you haven't seen the show, the first song of the second half involves singing and skipping, just the thought of it make me out of breath, but Helen and the cast made it all look too easy, whilst they whipped out these skipping moves and belted out notes, and then! Carried on with the show like they hadn't just done a work out that would floor me for the week! Out of all the shows i've seen 'Whipped into Shape' is one of the best numbers i've seen on stage.

The whole cast were amazing and the songs are just the best. I feel so so lucky to have been able to see this show twice, I literally cannot wait until I get to see this cast on stage again in whatever shows they have lined up next. The show finished it's tour last night (30th June) so unfortunately you can no longer see it, however if it does tour again, make sure you get tickets AS SOON AS they're released. 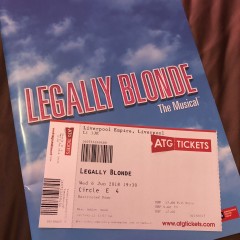