This year alone I have watched SO MANY films, I have seen some amazing films and some not so amazing films, but the ones I have been most excited to watch are obviously Christmas films!

Therefore, I thought it would be fun to write a TOP 10 list of my personally rated favourite Christmas films to get you in the mood this December.

This film stars Camera Diaz and Kate Winslet. Both currently at a place in their life where change would be welcomed with open arms. They decide to swap house over the Christmas period, one going to England and the other going to live the high life in LA. Whilst away they build new relationships and forget about their problems back at home.

Buddy the Elf was a human raised by elves. When papa elf reveals the truth to him, Buddy returns to New York to meet his real family and tries to adjust to life as a real man. At first he struggles to adjust to New York life but eventually becomes a unique but memorable member of society.

When Jack finds out about Christmas his whole life is changed, he tries to encourage his Halloween only town that they should celebrate Christmas. I like to think that you can watch this film at Halloween and at christmas and then a few times in November because it is just too good! If you love weird and wacky and music then this is the film for you. And its Disney! What more could you possibly want?!

The story of Scrooge and the journey he is forced to go on to help him find a love christmas and respect for the people in his life. There are so many different versions of this film that you could probably watch one of them on each of the 12 days of christmas. This one is my personal favourite because it is Disney and also because it is made in Motion Capture, an filmmaking process I just find really cool.

When Kevin is left behind by his family, all of his christmas dreams come true. He gets to experience what it's like to have the house to himself, but all that excitement is taken away when the house is targeted by robbers and he has to defend himself and the family home. I get that the parents are stressed and they have about 1 million kids but to then have an almost repeat situation again in Home Alone 2, come on now.

A young boy who no longer believes in Father Christmas is picked up by The Polar Express and taken to the North Pole. Along the way he makes new friends and faces obstacles throughout the journey. As well as going on a physical journey, he is taken on a mental journey to open his mind to the idea of Father Christmas.

When life gets too much for George and the bills start to mount up George wishes he was never born. An Angel is sent to show George what life would of been like if he hadn't of been there to stop some potentially fatal things from happening. With this help of the Angel he soon realises what ' a wonderful life' he actually has.

I love this film! This film reminds me of being little! Eloise lives in the plaza with her nanny ( Julie Andrews- surely that name alone should encourage you to watch this film). When the owner of the hotels daughter returns for her wedding Eloise makes it her goal to help her friend Bill win back the love of his life.

I hope at least one of these films makes it into your Christmas watching schedule, if you have any to add, please comment below and let me know! 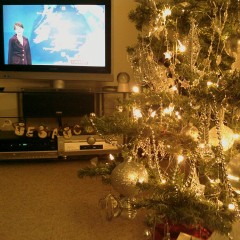 'Tis the season to watch films!

This year alone I have watched SO MANY films, I have seen some amazing films and some not so amazing films, but the ones I have been most excited to watch are obviously Christmas films!