A visual and musical interview with Liz Turner, famous radio broadcaster of the 1950s.

As you enter The Warren's Theatre Box, it's as though you've entered that talking box that is the radio. Except this time you are not just listening to the radio – you are watching it.

An Old Fashioned Girl's stroke of genius is the decision to present the story of a 1950s radio broadcaster, Liz Turner, through the expedient of a radio interview. 'Meta-radio', one may say, broadcasting about broadcasting, though the broadcaster is there, visible full-figure on the stage, and the only element that reminds us of the radio – the somewhat protagonist element therefore – is precisely what we cannot see, the voice-over that asks Liz about her favourite records, those she'd bring to a desert island. Liz chooses, and sings those songs on stage that evoke memories; memories of her own life, thus revealing how she came to success, and also of the times, full of changes and contradictions, when the radio was both a luxury and a friend, when women were emancipating, though under the watchful eye of society, and musical taste was changing, thus making it acceptable to broadcast pop music, as opposed to only classical song, from the liberating Elvis to the inexplicably successful 'How Much Is That Doggie In The Window', which the audience immediately recognised and greeted with laughter.

Together on stage with Liz (Kluane Saunders), graceful and energetic like her own voice, was also Richard Mann, smoothly slipping in and out of all the male roles, and Jordan Clarke at the piano.

This play is simple and well-made; it entertains while leaving something behind, just like an hour of a good radio show.

This show has finished its run at Brighton Fringe. For more information head here. 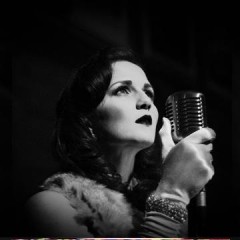 A visual and musical interview with Liz Turner, famous radio broadcaster of the 1950s.