More than a guided tour: listening to the stories of some of Brighton's most notorious murderers in a dark and immersive theatrical experience.

I knew the play was going to be held in the Old Police Cells Museum but, when I walked into Brighton Town Hall – the entrance slightly hidden by some construction works –, the atmosphere was so police-esque that for a moment I thought I must be in the wrong place. Despite being assured by the officers at the reception that the place is indeed right, I was still sceptical when I walked through the automatic doors and see a rather heterogeneous group of people waiting for… no one really seems to know what – supposedly a play, but it feels more like waiting for a tour.

'It's just going to be a guided tour of the old prison', I think when a young woman in a long white jacket, almost a medical coat, over an old-fashioned lace dress, gathered us together and started delivering information. But her voice changed with a jolt and she fixed her gaze upon a member of the group, and all of the sudden she was doing more than simply speaking, she was acting. OK, this will be more than a guided tour.

We walk down a steep staircase into the dungeon. There the guide in the white coat introduced the true stories of Brighton murderers from the past, and – without wanting to give out too many spoilers – these stories become alive.

An ingenious theatrical expedient, where the audience is at times asked to participate and at times excluded, as if the characters were there only to talk to each other or to themselves, with the tone of those who want to expose their version of the facts rather than beg for forgiveness. They show no sign of repentance, but no admission of guilt either. If anything, we members of the audience, who have in a sense become witnesses to their crimes, were made to feel guilty for having watched them first with amusement, then with horror, but throughout all with fascination. At one time or another, haven't we all had some evil thoughts?, seems to be the inconvenient moral of the play.

The costumers were nice, as was the make up, and the small flashlights worn by the characters like pendants to isolate their faces from the darkness were particularly effective in making them look like ghosts as well as voices of conscience. Combined with great acting this was a definite must see! 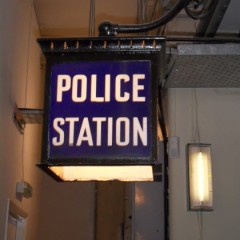 More than a guided tour: listening to the stories of some of Brighton's most notorious murderers in a dark and immersive theatrical experience.