After its success at Edinburgh Fringe, this exciting one-woman show comes to Brighton – or should I say this exciting woman? Indeed, as playwright Sarah Sigal says, it's Pamela herself who decides what's next (you can even follow her on Twitter! @UndercoverPam).

Pamela made her first appearance in Sigal's previous play World Enough and Time, a show about women's lives in political landscapes. Her story captured the attention and interest of the audience better than the other characters, and everyone seemed to want more. As such, Lady Pam (in the body and perfect diction of Rebecca Dunn) became the protagonist of a whole new show in which she tells in detail how she, a (fictional) Times fashion columnist with little interest in politics, got recruited by MI5 to spy on Wallis Simpson, King Edward VIII's controversial lover, suspected to sympathise with Nazi Germany.

A comical, frivolous, brilliant character, Pamela alternates expert and often scornful comments on suits and shoes with her newborn concerns about the degenerating political climate of the 1930s.

'We had no idea what the world was becoming. But back then no one wanted to know anything at all' or 'There is a danger in taking peace for granted' are amongst her most touching lines.

But to be fair, her lines are all good, for this play is beautifully written, skilfully combining action and description. Pamela shows the audience her story with her acting, even playing with voices and postures to impersonate other characters, but she also tells it like a book, framing direct speech with phrases like 'I said'/'he said' and enriching each scene with effective visual and auditory remarks – 'I watched London and all the people in it distorted by the raindrops' lets us vividly imagine her in the back of a car with a typical British drizzle lining the window; 'My heels clicking on the pavement', and the vigilant silence of the night is immediately present. Words are pretty much the only props in this production, which nonetheless never feels bare and is, on the contrary, very cinematic, also thanks to a soundtrack worthy of a Hitchcock movie (the seduction scene accompanied by Bizet's Carmen is top-notch).

Perhaps things move a bit too hastily towards the end of the show, when Pamela is a qualified spy and flies on warplanes to France and Portugal. The acting is once again superb, this time supported by foreign radio-like voices, but the character suddenly feels a bit distant. At least the audience knows it's for a good cause, as she is now a more mature, politically opinionated, still somewhat funny Lady Pam, and they'll walk out of the Warren's Theatre Box back into the hot afternoon with the certainty of having seen something mostly enjoyable! 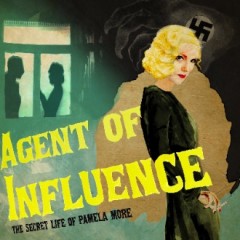 Agent of Influence: The Secret Life of Pamela More