A traditional production with some good elements that fails to excite

Sweethearts, first produced in 1874, is a romantic comedy that tells the story of a man and woman's last meeting before his departure to India and their re-encounter thirty years later. Ironically, their memories of their last meeting differ considerably, and what had seemed an unrequited love on the man's part turns out to be a much deeper affection on the woman's side.

On a very different note, The Hooligan, Gilbert's final play, produced just over three months before his death in 1911, is a character study on a man's last hours in a prison cell before his execution. Guilty of having murdered his girlfriend, he trembles and whines painfully, claiming he did not mean to kill the girl and pleading for leniency on account of his weak heart.

Two neglected plays by the same author, similar in length and equally well-written; but other than that, these plays have nothing in common. If this distance, on the one hand, highlights the versatility of Lloyd Ryan-Thomas, in the role of both male protagonists, it can also end up leaving the audience slightly unsatisfied, with the feeling of something missing or unfinished and with contrasting moods. A better choice, perhaps, would have been to switch around the order of the plays so as to conclude on a lighter note, as it happens with cycles of classical plays or sometimes with operas.

The production, traditional and straightforward, with a few realistic props, does not add much to these overall simple plays, and again the feeling is to have seen something good yet not entirely satisfying.

Note, however, the position of the wooden bench in Sweethearts; awkwardly placed downstage with its back to the audience in the first half of the play, to then turned around and moved upstage in the second half. A confirmation that it is in fact the same bench is the sycamore in front of it; a shrub at the beginning, a giant tree at the end, it is a symbol of mistaken evaluations and the contradiction of changing while remaining the same. The overturning of the scene corresponds to that of the relationship between the characters, and it acts as a reminder that it is all about perspective, though through memory we often flatten things out to accommodate our own narration. 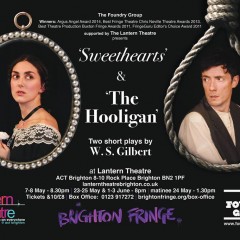 'Sweethearts' and 'The Hooligan' by W. S. Gilbert

A traditional production with some good elements that fails to excite