Voice MagReviewsFestival of the Spok…

Graphs, fire, and ukulele's - the nerds are back!

I'm a long time fan of Festival of the Spoken Nerd, so I was very excited to see what they had come up with this time.

The first thing I took away from this show is just how horribly inept I am at maths. Much more than other FOTSN shows, Just for Graphs seems very maths heavy. Magic squares, different kinds of graphs and charts, and actual equations!! There was plenty of content for hardcore nerds in this show!

Although some of the science went over my head, the Nerds did their best to make it accessible. This is one of the great things about Festival of the Spoken Nerd. They are very knowledgable on their specific subjects, but unlike some intellectuals, that doesn't make them unable to make the content relatable.

There was some audience participation, including a very cool experiment which demonstrated the conductivity of humans. I vaguely recall seeing a similar experiment in school, but the scale in which this was done was impressive, and alone made the show worth seeing.

We learned about Venn diagrams, and the more versatile Euler diagram, and parabolic arcs. Know what any of these are? Then you are definitely the target audience for this show! For those of you who don't, worry not, there was also fire, music from the incredibly talented Helen Arney, and permission to tweet out while the show is happening.

One thing I was sad to see was the apparent death of the faithful overhead projector. The OHP was replaced by something that felt even more antiquated, a slide projector. Yes, a slide projector, like your grandparents might have shown their holiday photos on. There is something bizarrely comforting about the juxtaposition of new scientific theories, and retro equipment.

The conversations are still very natural, the jokes still feel very off the cuff, and the shows content is still informative. This is the Nerds in their element - raw geekery!

If you have a child who is interested in science, or you are a child at heart who loves stats and maths, you need to see this show.

FOSTN: Just for Graphs are performing every day until the 30th August, at 18:30, in Assembly George Square Studios. For tickets and more information, visit the Fringe Website. 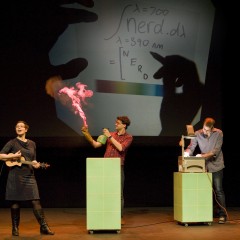 Festival of the Spoken Nerd: Just for Graphs

Graphs, fire, and ukulele's - the nerds are back!