Enchanting, captivating, but marred by the speakers.

Before I start reviewing the act, I will offer advice to potential goers and to the venue themselves. Do not sit on the corner tables, you will be under the reach of the speakers, and will hear the drums more than anything else. Unfortunately this was the case for me, and I feel like I've really missed out on what was an incredibly charming show. That's not to say that the drummer was bad, by any stretch of the imagination. He was just very loud, and not singing. This did somewhat inhibit my enjoyment of the show, and so I couldn't fully appreciate the performance in all of it's glory.

Isabelle Georges is a French cabaret singer, and in this show she is joined by her band of fellow French musicians, to enchant and woo you with her soft, sultry voice, and fabulous accent. She is quite honestly enchanting, and her presence on stage is captivating, with her sleek costume changes and spectacular (and slightly unexpected) dancing. It would appear that as well as being vocally blessed, Isabelle is also more than capable at tap dancing, which is made even more impressive by her ability to tap dance in high heels. Really tall high heels. Unfortunately they either weren't tap shoes, or the stage wasn't an appropriate surface for tap, as the noise that was created was more of a rhythmic "thump" than a more pleasing "tap" as one would expect.

The Band – featuring a keyboard, drums, guitar, upright bass, and wind "section" (consisting of one man) – were all as equally talented as Isabelle herself, often taking much of the limelight as they were as much of the show as she was. A personal favourite of mine was the talent of the manwhose ability to play the trumpet, clarinet, and saxophone was spectacular. I was mesmerised by the dexterity of his fingers during complex solos and then his ability to seemingly melt into the background while playing smooth riffs. He really tied the entire piece together. That's not to say that the rest of the band were bad by any standard, they were all incredibly talented (and good looking, might I add) musicians. I found the player of the Upright Bass to be also particularly fascinating to watch. His transitions between finger-plucking to the use of the bow was incredibly – blink and you'd miss it!

The songs in this show are varied, from slow, heartfelt odes to love lost, to upbeat songs about enjoying life and seizing the day. Be wary, however, as a slight bit of understanding of French is required to fully enjoy the show. As Isabelle is French, it is only right that some of her songs are sung in French, and a lot of her comments use "Frenglish" (A mixture of French and English which is quite charming), so perhaps pick up your old French textbook to remind yourself of some basic language skills! But don't sit beneath a speaker. It will severely inhibit your enjoyment.

Oh Là Là! Starring Isabelle Georges is performing every day until the 30th (not 24th) at the Assembly Checkpoint. For tickets and more information, visit the Fringe website. 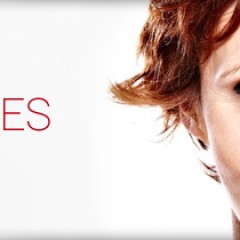 Enchanting, captivating, but marred by the speakers.