I am White Nish, which is certainly a compliment!

I have a nasty habit of always being noticed when I go to see standup or the like. Perhaps it's because I'm tall, white, and I wear a waistcoat that has a shiny, metal "Arts Award" badge on it. With that in mind, I spent a lot of this show being called "White Nish", which was cemented after an overenthusiastic "thumbs up" - "Classic Nish" claimed the original. I may bring it on myself, however, I digress.

Cultural observations, suggestions to solve world crises, and societal pressures make up the bulk of this show, with fair amount of it being steered with an unusual view to censorship – specifically within the field of standup. I shan't spoil any of the joke he makes, but they are each perfectly crafted to get a specific reaction, with funny enough build up to have the audience on the edge of laughter throughout his set.

Unfortunately, as is the nature of all live shows, there are always factors that influence the success of the show that are out of the control of the host, in this case there were two moments, courtesy of the audience (and mother nature). Every good comedy show has moments of dark, that highlight the light moments, creating a release of tension that gives a bigger laugh than if it was just joke after joke after joke. Unfortunately, Kumar's moments of dark – of which there were two main moments – were both prematurely interrupted by audience members answering the call of nature, one of which was after a (seemingly) angry rant. Had the joke been pulled off, as the audiencce sat in stunned silence, he would have pulled it off with an aplomb. However, an audience member got up to answer nature's call at the apex of his set, which did result in a lot of laughs, but none of them could have compared to the laugh he could have gotten with the planned routine, unfortunately, this did result in the biggest laugh of the performance being from the actions of an audience member.

In spite of what I've just said it would be fair to say that none of his jokes fell flat. I can guarantee that he has one joke that will appeal to everyone. His humour is largely inoffensive, and almost exclusively left-wing oriented – bar one right wing joke, which created an interesting paradox where the joke itself was funnier than the "punchline", something that I've never seen in standup. It's worth seeing just for that. 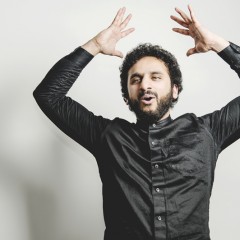 I am White Nish, which is certainly a compliment!