A show with comedic timing like no other, there is no way you won't be laughing hysterically by the end.

From the minute he walked on stage, I knew Rob's show would be by far the best comedy show I had seen in my time in Edinburgh. He did not disappoint.

From start to finish, the audience did nothing but laugh, often hysterically, at anything Rob said. His comic timing is practically perfect, to the point where I reckon he could say something that would never be funny, but time it in such a way that it made people laugh anyway. That kind of skill is hard to come by, and I am honoured to have been able to watch one of his shows in the flesh.

His stories were based around everyday topics that anyone could encounter, so there was always someone in the audience who could relate in some way to what he was saying. His ease on stage made him comfortable and relaxing to watch, and everyone in the audience had a brilliant time. He also had the whole room completely under his control from the second he came out on stage, and he certainly used it to his advantage, leaving us laughing uncontrollably, time and time again.

If you don't go and see this show, you will most definitely be missing out on one of the funniest hours of your life. Rob is a brilliant comedian and his show is a definite must see!

Rob Beckett: Mouth of the South is on at 8pm until 30th August, excluding 17th.

Suitable for age 14 and over. 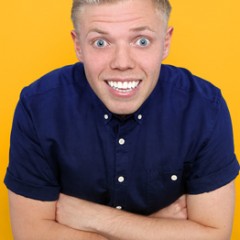 Rob Beckett: Mouth of the South

A show with comedic timing like no other, there is no way you won't be laughing hysterically by the end.