A selection of Fringe acts who call themselves immigrants or the children of immigrants collect to tell us about their formative migrant experiences.

I was expecting something in the vein of Lili La Scala's AFVS, with a wide ranging cross section of acts from across the Fringe. I was slightly disappointed to find only four acts including Kershi, all of whom, though this didn't disappoint me as much, did stand-up.

The stand-up they did was overall refreshingly different – stories about things that were far removed from the experiences of the regular Fringe goer. We learnt about what it was like growing up, from moving here from around the world and/or growing up as the children of the people who made the trip. As one of the latter myself I related closely to much of what was said.

Kershi's own comedy, as compere, was most removed from the immigrant humour as she bounded in and out of experiences based in her migration, which was commendable. This worked towards the show not becoming a cesspool of unrelenting brown jokes.

Three-quarters of this show was screamingly average. This may only be because, like I say, I was more used to the migrant jokes and ethnic jokes. That said, the audience were hardly howling their lungs up. I laughed a fair bit at odd jokes, but not really over consecutive jokes. It was also nice to hear from a non-Black/-Asian immigrant's child in Juliet Meyers who told us about her Iraqi-Jewish older relatives.

Then came the famed final quarter. The star of hit ITV quiz programme, The Chase, Paul Sinha who, while moonlighting as one of the country's greatest quizzing minds, is a stand-up comedian I was all to happy too hear the name of. Sinha's was the tale of his living in and coming out of a life as a gay man in an Indian household in Britain. It was dominated by poised gags and confident delivery as well as the story which evoked all kinds of emotions in the audience. We almost felt proud of him for having come through the difficulty in living in the closet and coming out to a fully supportive system, and a new partner who invigorated him. His routine hit home hard – regardless of ethnicity or sexual orientation - and meshed together the touching story with humour to have us hanging on every word of his.

All of this said. I will treasure my "I <3 Immigrants" sticker for life.

Catch Immigrant Diaries: Sajeela Kershi and Guests at the Assembly Rooms at 54 George Street all month long except 17 August - https://tickets.edfringe.com/whats-on/immigrant-diaries-sajeela-kershi-and-guests 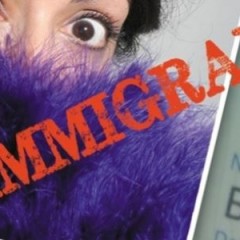 A selection of Fringe acts who call themselves immigrants or the children of immigrants collect to tell us about their formative migrant experiences.